Before the Internet could finish off newspapers, the pillars of the digital age are already suffering their own slide. Portals Yahoo!, MSN and AOL — for years the largest source of traffic on the web — are seeing recent dropoffs in visitors, pageviews and, most dramatically, time spent by users.

But unlike slow-to-change print companies, the portals saw this coming — and are already trying to do something about it by focusing on content creation and its associated "stickiness."

In keynotes, on panels and in the halls at the eighth All Things Digital conference in Rancho Palos Verdes, Calif., earlier this month, the consensus was that the portal strategy employed by the big three of AOL, MSN and Yahoo is as good as dead – with Facebook holding the smoking gun.

What's more, portals' push toward original content – Yahoo’s $100 million acquisition of Associated Content, AOL’s declaration that it will be “the largest net hirer of journalists in the world next year” – only underscores how much trouble they’re in. 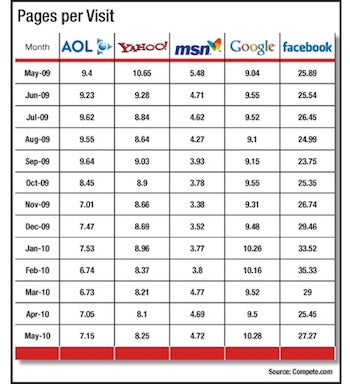 And the numbers don't lie.

Page views, meaning the number of pages viewed by each individual user, have fallen significantly for each of the big three: AOL (-32 percent), Yahoo (-28 percent) and MSN (-30 percent) all posted steep declines in May.

But if you’re an AOL or Yahoo! executive, here’s the statistic that is most worrisome: Average time spent on portal websites is down 21.7 percent over the last year, with users spending on average six and a half minutes before scurrying off somewhere else.

“The big word in digital media for the last year has been 'engagement,'” said Betsy Morgan, former chief executive at the Huffington Post, now a senior consultant. “No more 'drive-by' traffic.”

Where were those users spending more time?

According to Compete.com, in May 2009, Facebook users spent an average of 15 minutes on Facebook browsing their Friendfeeds and updating their profiles. In May 2009, they spent 22:39 – an increase of nearly 50 percent.

The time-shift from portals to social media has never been more pronounced.

Another factor in the sinking engagement figures, Compete.com data manager Chris Bulger said, could be the rise of Bing as a search option.

“Some people who relied on the portals for their search became aware of Bing through their marketing," Bulger said, "which cut into the time spent.”

Indeed, SEO aside, the strategy of a sexy headline or a flashy slideshow appears to be no longer working. “People seem to be relying more and more on Twitter or Facebook to get their news,” Bulger said, “and less and less on portal homepages.”

“The idea of ‘hanging out’ in portals like Yahoo and AOL is becoming less and less likely,” Morgan said.

No wonder executives at the big portals want to make their sites "stickier," which is driving AOL's and Yahoo’s recent forays in creating and/or acquiring original content. MSN's strategy, increasingly, is to partner up with experts in particular content areas. 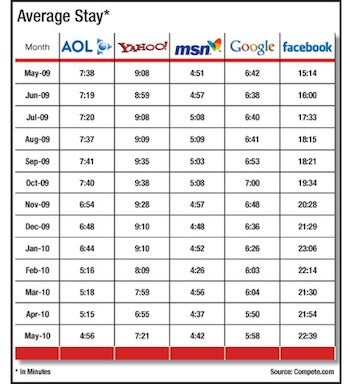 The shift is somewhat ironic, given that until this week, AOL owned a social network of its own  – Bebo – that it bought for $850 million in 2008. (The company sold it to Criterion Capital Partners LLC for less than $10 million – a fire-sale figure — according to a Bloomberg report.)

Since he took over as CEO, Tim Armstrong has been adamant about transforming AOL from a ubiquitous dial-up service to a forward-thinking, Web content company — shedding products like Bebo and ICQ (its instant messaging service) and investing in things like Seed, its algorithmic content production arm, and hiring veteran executives and journalists like David Eun and Saul Hansell to lead them. AOL was spun off from Time Warner in December.

The company’s new game plan is to create content — original, compelling and scalable enough for advertisers to buy in.

Eun, AOL’s new president of its media and studios division who made the bold hiring prediction, was not available to comment on his strategy for this story. But he laid bare that strategy during Internet Week New York, and formalized it in an “all-hands” meeting with AOL staffers.

The strategy involves what he calls 17 “super networks.” AOL has more than 80 branded Web sites, and plans to trim that number down to about 30 and filter into the larger groups – like AOL News & Info, AOL Entertainment and AOL Life — without losing the content. The goal? “To be the world's largest producer of high-quality content, period.”

When Eun joined AOL, he figured out quickly that homegrown content was getting the most traffic across all of his company's platforms. His no-duh moment came early: Make more of that, and do it faster.

Eun also said the company is working on a way to measure the value of content based on the click rate, time spent and associated ad revenue — in other words, AOL's new hires had better figure out a way to pull ad- and click-friendly content out of a hat.

“What AOL is trying to do is a sort of hybrid approach,” Morgan said. “Finding out what kind of content works, brandwise, with something like Seed, and then hiring real journalists to create and build real, scalable brands. It’s a smart approach. And the thing is, they do have time to figure it out.”

“If your newsroom has established journalists doing what they’ve been doing for a million years," Morgan said, "you’re going to lose.”