“Neil Patrick Harris, you just saved the Emmys while ringing up $30 million at the weekend box office! How did you celebrate the day after, hours before the season premiere of your hit sitcom “How I Met Your Mother”?
Apparently by hitting a late Monday afternoon showing of his own #1 movie “Cloudy with a Chance of Meatballs." (He voiced Steve the Monkey.) Unconfirmed reports had Emmy’s savior indulging in some PG-rated relaxation with a friend at the Universal CityWalk theaters late Monday. Maybe he was partied out. 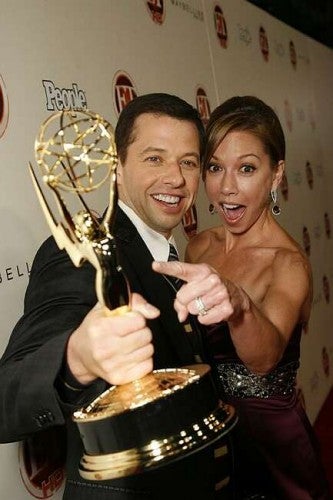 After three hours of live TV, Harris joined his “vanquisher” Jon Cryer (pictured with wife Lisa Joyner at left; photo by Alex J. Berliner) at the Entertainment Tonight Emmy Party at the Vibiana Cathedral after passing through the Governor’s Ball. He skipped the media out front. Harris headed straight to a cabana in the back, where he held court with some ET executive types and a well deserved glass of wine. (Note to aspiring “Bro’s”: Barney Stinson drinks “Jacob’s Creek.") Gold toting winners at the bash, co-hosted by People Magazine, included Toni Collette, Matthew Weiner, Bryan Cranston, Jeff Probst and Jerry Bruckheimer.
Joel McHale (pictured below; photo by Casey Rodgers/AP) was still smiling as he arrived at the party, despite a split decision in his own multi-premiere week. (His NBC vehicle “Community” started strong on Thursday, but McHale’s co-starring role in “The Informant” went down against the aforementioned “Meatballs.")
At least the McHales didn’t come out of pocket on transportation, as they joined the eco-popular crowd of Andy Samberg, Chris O’Donnell, Christina Applegate, Elizabeth Perkins, Jane Krakowski, and Jeremy Piven in making a “transportation statement” on Emmy weekend. Cruising around town in this year’s incarnation of the Prius, Audi’s “clean diesel” SUVs (The Q7 TDI) squired talent in un-missable white wheels against a perpetual sea of black town cars that signaled to photographers, "Pick up your cameras." 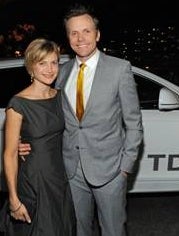 The cars couldn’t pull up soon enough for the organizers of HBO’s bash at the Pacific Design Center. Early arriving guests lamented their fellow party goers and cited ET’s party downtown proximity to the awards. “Too many industry drones,” one publicist lamented while waiting for talent. All that changed quickly. Castmates Jamie Lynn Sigler, Jerry Ferrara and Emmanuelle Chriqui helped anchor the “Entourage” posse as Chloe Sevigny and Jason Segel made a much discussed joint appearance. Even FX winner Glenn Close hit the fellow cabler’s bash, as did a strong contingent of winners from the net’s own “Grey Gardens."
On a night where every star from the “D-List” (Kathy Griffin) to Sumner Redstone was out partying, the last place Hollywood wanted to be was at home.