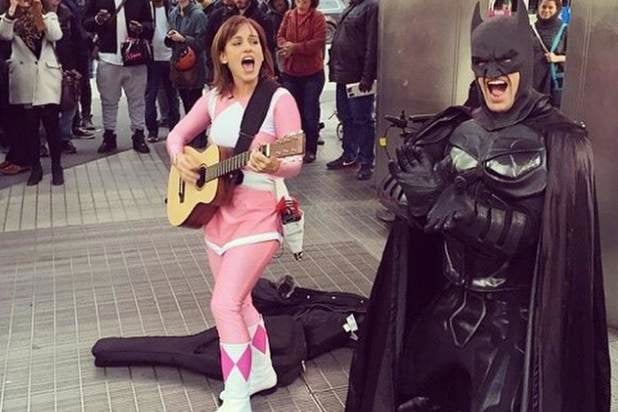 Original Ranger actress Amy Jo Johnson suited up to sing in the streets of Toronto last weekend after reaching her $75,000 goal on Indiegogo for a campaign to fund her directorial debut, “The Space Between.”

The feature-length film is a comedy about a proud new father who discovers his child is not his own, so he sets out on a journey find the biological father.

What does that have to do with Johnson’s “Power Rangers” past?

Nothing really, but co-star David Yost, who played the Blue Ranger, challenged her to put on the outfit and sing in “a major public place” if she funded her film by Nov. 15, instead of the campaign’s original closing date, Nov. 23.

The stunt appears to have helped Johnson — also a singer/songwriter with three albums to her name — go above and beyond what she was asking for. As of Tuesday, the campaign had raised nearly $105,000.

Watch a video of her street performance below: