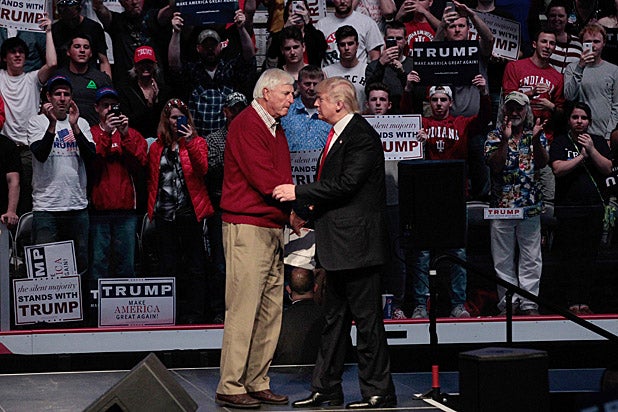 Forget President Donald Trump’s unpopular travel ban, allegations of collusion with Russia, and his bashing of the mainstream media in press conferences. His most recent escapade could be his most egregious yet.

Prepare yourself: President Trump will not be filling out an NCAA bracket.

ESPN had reached out to the White House to see if Trump would continue Barack Obama’s annual tradition of filling out a bracket for both the men and women’s basketball tournament, but alas, Trump will not be taking part in March Madness this year.

Also Read: Trump Asks Black Reporter About Congressional Black Caucus: 'Are They Friends of Yours?'

“We expressed our interest to the White House in continuing the presidential bracket,” ESPN said in a statement to TheWrap on Thursday. “They have respectfully declined.”

While he’s wagering on the big tournament, Trump does boast at least on college basketball veteran among his loyal supporters.

Former coach Bobby Knight (above with Trump), who won three national championships during a 30-year career at Indiana, attended a number of Trump’s rallies during his presidential campaign, telling a crowd in Grand Rapids, Michigan: “we need a Donald Trump more than we’ve ever needed anybody since George Washington,” Politico reported.

Also Read: President Trump Bashes 'Out of Control' Media: 'I Inherited a Mess'

Obama, himself an avid basketball player, filled out a bracket every year he was in office. Sadly though, the former Commander-in-Chief was not so good at picking winners.

The only time he successfully predicted the final winner of the tournament was his first year in office, when he correctly picked North Carolina to win it all.

Last year, Obama picked Kansas to win it in the finals. He had previously picked Kansas University twice, both in losing efforts. But Kansas would not live up to Obama’s expectations, with Number 2 seed Villanova beating North Carolina.