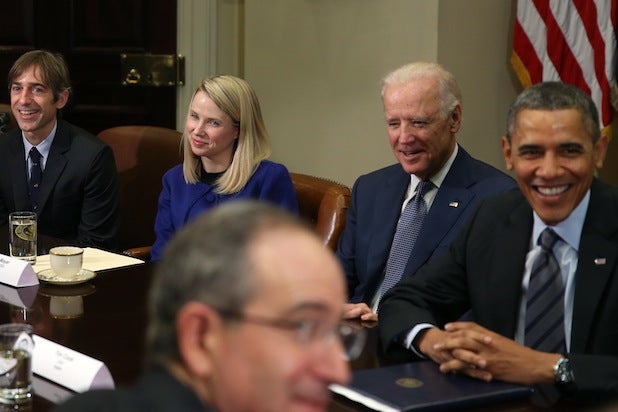 President Obama, meeting with a who’s-who of Silicon Valley luminaries on Tuesday, had one question for Netflix founder/CEO Reed Hastings:  Did he bring any screeners of “House of Cards”?

Hastings laughed — then asked the President to do a cameo on the series, according to a White House pool report.

Obama also suggested that Kevin Spacey seems to exist in a different Washington.

“I wish things were that ruthlessly efficient,” said Obama (who’s probably aware that Frank Underwood will resort to murder, sexual impropriety, blackmail, fraud and a litany of evils to grease the legislative process).

Obama added that in the series, “this guy’s getting a lot of things done.”

Also read: Obama’s Closed-Door Meeting With Top Hollywood Brass: Who Was There?

The White House said the meeting was held to discuss fixing the Affordable Health Care’s healthcare.gov website — and the prospects for doing a better job in the future to maximize innovation, efficiency and customer service in running federal websites. Also addressed: national security, the economic impact of unauthorized intelligence disclosures and ways the government can partner with the tech sector.

The confab came a month after Obama’s visit to Hollywood for similar purposes.