Primetime TV directing remains a white man’s world, according to a report released Wednesday by the Directors Guild of America.

White males still directed nearly three-quarters of all episodic television; the remaining 28% of episodes were divided among minority males (14%) and women (14%, with white females at 12% and minority females at 2%), the survey revealed.

Several shows had no women or minorities directing episodes, including King Street and TV Land’s “Hot in Cleveland,” Uptown Productions and Nickelodeoon’s “iCarly” and FX’s “It’s Always Sunny in Philadelphia.” 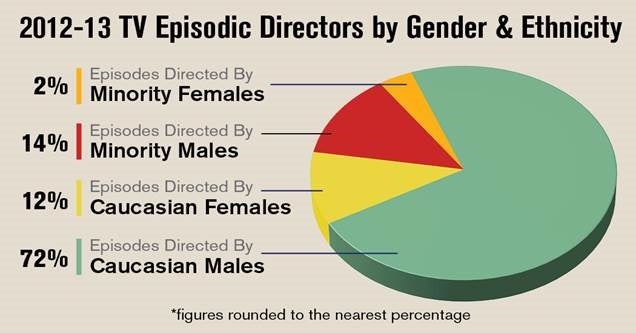 On the up side, several shows were exclusively directed by minorities or women. Among those are BET’s “The Game” from Breakdown Productions and the 3SR’s “The Real Husbands of Hollywood,” Fuse’s “The Hustle” from Marlowe Productions and TV One’s “The Rickey Smiley Show.”

“I applaud the shows whose diverse hiring practices landed them a spot on our ‘Best of’ list,” said Betty Thomas, Co-Chair of the DGA National Board’s Diversity Task Force and DGA First Vice President. “Some of them have clearly made a big commitment to diversity, and I think they’ve been well-served by it. I’d even point out that many of the most acclaimed and honored television episodes of the year were directed by a woman or a minority.

“But we can’t ignore the shows on our ‘Worst of’ lists – how is it possible, in this day and age, that more than a dozen series didn’t hire even a single woman or minority director all season?”

The complete “Best of” and “Worst of” lists can be found on the guild’s web site.

Over the past three years, DGA executives and members of the Diversity Task Force held nearly 20 meetings with production companies specifically to address diversity in hiring, and additional meetings were held at the individual show level.

The DGA also maintains a contact list of experienced women and minority directors to make it easier for producers making hiring decisions. The list is handed out during the meetings with networks, studios, production companies and individual series, and can be obtained by any production company by contacting the DGA.

“A quarter of the 200 series we examined didn’t hire enough women or minorities to avoid winding up on our ‘Worst of’ lists. That means they hired fewer than two women or minority directors for every 13 episodes they shot,” said Jesús Treviño, Co-Chair of the Diversity Task Force and Alternate Board Member.

“If every one of those shows simply doubled the number of women or minorities they hire, we’d start to see some real progress. And if they made a genuine commitment to diversity – wow, what a difference that would make.”