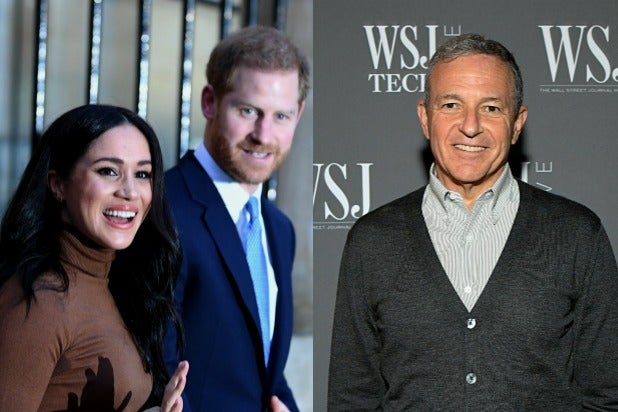 Meghan Markle’s voice acting deal with Disney may have had its origins traced back to the premiere of last year’s remake of “The Lion King” and a conversation between Prince Harry and Disney CEO Bob Iger.

In a video released Sunday by TMZ, you can see Prince Harry having a chat with Iger and his wife while Markle spoke with “Lion King” star Beyonce Knowles-Carter and her husband, Jay-Z. During the chat, the prince makes a pitch to Iger saying, “You know she does voiceovers, right?”

“Oh, really?” says a visibly surprised Iger. “I did not know that.”

“You seemed surprised, but yeah, she’s really interested,” Prince Harry said. His next statement can’t be made out in the tape but Iger replies by saying “We’d love to try.”

The Sunday Times reported that Markle signed on to do an unspecified voiceover project with Disney in exchange for the studio making a donation to the conservation charity Elephants Without Borders. The deal comes after the Sussex couple announced on Instagram that they “intend to step back as senior members of the royal family and work to become financially independent, while continuing to fully support Her Majesty The Queen.”

The sudden announcement, which was made without the knowledge of the rest of the British royalty, has prompted Queen Elizabeth II to summon her family for a meeting on Monday at their estate in Sandringham. Markle, who is currently in Canada with her son Archie, is expected to join by phone. According to ABC News, a spokesperson for Buckingham Palace said that “a range of possibilities” on how to proceed would be discussed, but the queen was determined to resolve the situation within “days, not weeks.”