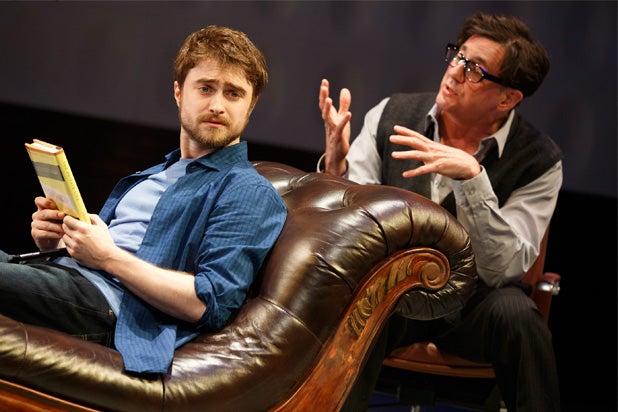 No one’s written a book “Google, Facebook, and Apps for Dummies,” but there is a new play on the subject. James Graham’s “Privacy,” which opened Monday at the Public Theater, spoon-feeds us the ways in which information about our lives is collected and stored, in effect turning the Internet into a massive surveillance device.

Watching “Privacy” is not unlike being on a cruise ship where the nightly entertainment alternates between mentalists and hypnotists. There’s lots of audience participation — some real, some faux. Occasionally, audience members join the action on stage, but for the most part, we get to stay in our seats as actors direct us how to use our cellphones to make their points about the world’s collective loss of privacy.

Yes, “Privacy” begins with a voice announcement from the Public’s artistic director, Oskar Eustis, asking us to mute but keep our iPhones up and running. These actor-directed searches on Google or our Facebook page proved popular, the audience breaking into several impromptu discussions. When this happens, an actor yells, “Put your cellphones away! Put them away now!”

“Privacy” is a play that is conceived more than it is written. In the Playbill, Graham’s author credit is below the credit “created by James Graham & Josie Rourke,” which is as it should be. Rourke also directs.

In the excellent cast, Rachel Dratch and Reg Rogers are especially effective at essaying various real-life experts, such as James Clapper and James Comey, who make appearances not unlike Marshall McLuhan’s in “Annie Hall” when Woody Allen wants to silence a loud-mouth fool standing behind him in a movie queue.

Buried beneath all the high concept is a slim thread of a plot: A Type-B guy (Daniel Radcliffe) has just broken up with his boyfriend, but claims to be bisexual, and thinks he can find a new love (male or female, which works out well for the audience-participation part of the show) by using the Internet.

Unfortunately, he can’t break his habit of tracking his ex’s brand-new lover. By the time our hero starts interacting with Edward Snowden (on tape here), the play’s Kafka-esque message has completely snapped the fragile story.

Because Matthew Broderick is now over 50 years old and hasn’t inspired the critics since his “The Producers” heyday, Radcliffe has become the go-to guy for these kinds of nebbishy lovable introverts.

He’s good playing them. But the comparison of these two actors should tell Radcliffe to start looking for another kind of role, like Jimmy Porter in “Look Back in Anger.”