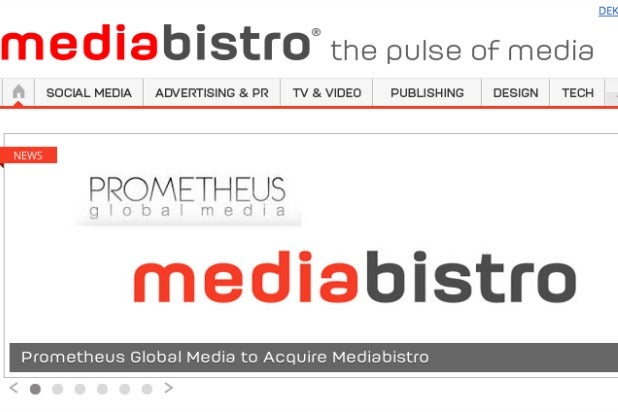 Prometheus Global Media, which owns Adweek, The Hollywood Reporter and Billboard, is adding Mediabistro to its stable. The media site announced Thursday that it is selling its assets to PGM-MB Holdings, LLC, a wholly-owned subsidiary of Prometheus.

The deal includes TVNewser, AgencySpy and GalleyCat as well as the Mediabistro Job Board and Mediabistro education business, Mediabistro said.

The deal is expected to close, subject to stockholder approval, in late July, according to the company. Mediabistro CEO Alan Meckler will begin a new company called Mecklermedia to continue Mediabistro’s trade show business and related sites, as well as the Clio Awards and Film Expo Group.

The purchase price is $8 million in cash. Founder Laurel Touby originally sold Mediabistro.com for $23 million in 2007.

Hi Everyone,
I wanted you to hear the news before it goes wide.

Mediabistro is announcing that it is going to be acquired by Prometheus Global Media, which operates brands including Adweek, the Clio Awards, The Hollywood Reporter, Billboard magazine, and other properties.

I’ve met with Jeff Wilbur, the president of Adweek and CFO of PrometheusGM and some of his team and I am excited about what this means for Mediabistro editorial and the company as a whole. Alan Meckler, in a new company to be called Mecklermedia, will keep the events part of the business which includes the 3DPrinting and Bitcoins shows and related properties. The deal is expected to close in mid/late July.

For now, and in the future, it’s business as usual for all of us.

There will be more information in a press release this morning. Don’t hesitate to reach out to me if you have any questions.