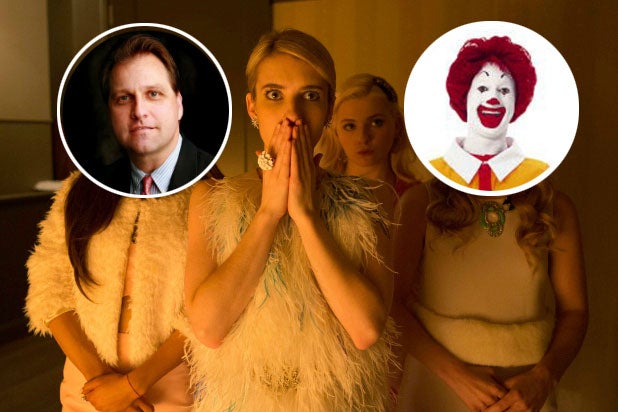 “The company that sells Happy Meals to kids, the company that has jungle gyms and playgrounds at their restaurants, seems to have charted a course that … really focuses on edgy fare [and] content that is way more explicit than what they’ve done in years past,” Winter told TheWrap on Wednesday.

The PTC wasn’t always this sour on the fast food chain, which used to be among its favorite sponsors. Now Winter wants you to keep driving until you see a Wendy’s, which is on his organization’s “nice” list.

Actually, the PTC isn’t very happy with Fox programming decisions overall. When asked which TV show he would wave a magic wand to cancel, the advocacy group’s leader cited the broadcast network’s “Gotham” as a major offender, due to its violence. And the PTC has maintained an ongoing battle with “Family Guy,” which also gets beaucoup sponsorship bucks from Ronald McDonald and the Hamburglar.

“You can’t cater to small children and joke about raping them,” Winter said of the Golden Arches’ sponsorship of Seth MacFarlane‘s animated humor.

Right now, however, his beef with the burger giant is its “Scream Queens” support. Winter said the Ryan Murphy program’s “very concerning content” is not appropriate for even its TV-14 rating — and he is disgusted by the fact that Fox debuted the series at 8 p.m. ET, which made for a 7 o’clock central time premiere.

“In a 500-channel … universe, there is stuff out there they can sponsor,” he said of alternatives for McDonald’s, which also targets high school kids and college-age adults. “They can reach the demographic without sponsoring murdering co-eds.”

McDonald’s did not immediately respond to TheWrap’s request for comment. For that matter, the company hasn’t been much more communicative with the PTC.

“McDonald’s has been doing everything they can to put their fingers in their ears when we talk,” he told us.

As for Fox, the network also declined to participate in this story. An individual associated with the program did remind TheWrap that all “Scream Queens” promos and episodes include the standard disclaimer “Viewer discretion is advised.”

Finally, the insider told us that “Scream Queens” does not actually have a paid integration with McDonald’s. In other words, while the PTC may use the phrase “brought to you by McDonalds” in its press statements — hyperbolically or not — the show actually is not sponsored in that capacity. The fast food retailer simply buys ad time within the hour, as do many other companies.

The push and pull between the PTC and Fox looks to continue indefinitely, but it’s unclear if McDonald’s will remain in the middle. Not only does Winter want the Big Mac chain to pull its money, he wants the show off the free airwaves altogether. While he won’t make a prediction, Winter believes his group can make that kind of impact, citing a “laundry list” of shows that have been canceled after PTC boycotts.

Despite his protests to purify programming, he wants readers to know that he’s not some choir boy.

“People who know me laugh at the idea [I’m] a prude,” he told TheWrap. “I’ve seen hump-bump-squirt movies in my history — they are what they are.”

Odd phrasing and possible oversharing aside, Winter believes we can all find a middle ground here — not everything needs to be The Disney Channel or History, though he really likes those.

“My favorite TV violence is in the form of L.A. Kings hockey,” the NHL fan offered. “But, look, I had George Carlin‘s ‘Class Clown’ album in college and loved it. I could watch ‘Pulp Fiction’ in a movie theater and really be entertained.”

“But at a time and a place,” he concluded. “Not in primetime. Not when kids are watching.”


13 Reality Shows Killed by Scandal Before '19 Kids and Counting': 'Megan Wants a Millionaire' to 'Buckwild' (Photos)