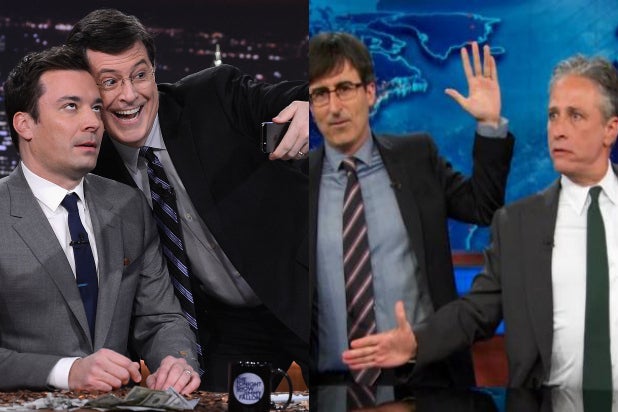 Stephen Colbert is the only host in late night TV who plays a character. On “The Colbert Report,” he’s a self-absorbed, closed-minded caricature of a jingoistic talk show host, who is supposed to be anything but endearing.

But Americans embrace him anyway. Colbert is the most-liked late night talk show host, according to data that the Q Scores company provided to TheWrap.  The leader of Colbert Nation and host of Comedy Central’s “Colbert Report” has the highest Positive Q Score in late night: a 20.

Perhaps the old adage, “Just be yourself,” is not valid after 11 p.m.

To create Q Scores, executive vice president Henry Schafer and his team provides a celebrity’s name and a brief description to more than 1,800 viewers. The viewers are asked if they recognize the person, and how they feel about him or her. The average Positive Q Score for a celebrity is 15.

The company’s numbers for late night include adults surveyed from mid-January to early February 2014, prior to Jimmy Fallon taking on “The Tonight Show” and Seth Meyers taking over “Late Night.”

No. 2 in popularity is Colbert’s fellow “Daily Show” alum, John Oliver. He has a strong 18 Positive Q Score, which he will take to his new weekly HBO series, “Last Week Tonight.” Oliver’s acclaimed summer guest-hosting stint on “The Daily Show” must have been fresh in viewers’ minds.

Colbert’s and Oliver’s mentor, Jon Stewart, comes in third in popularity with a 16 Q Score, the same as new “Late Night” host Seth Meyers. But Stewart has higher recognition. Meyers was best known at the time of the survey for his more than 12 years on “Saturday Night Live.”

After Meyers, Jay Leno had a Positive Q Score of 15. Leno’s was the most-famous name on the list, with 81 percent recognition.

Next up was Andy Cohen of “Watch What Happens Live.” Cohen is not highly recognizable, but he is fairly well received with a 14 Positive Q Score. Fallon, who was transitioning from the 12:35 a.m. timeslot to 11:35 p.m. at the time of this survey, has a 13 Q Score.

But Fallon is scoring well in “Tonight” ratings, so don’t be surprised if his score goes up.

At the bottom of our rankings is Arsenio Hall, who has an 8. Carson Daly has a 9. Daly was also covered in our Morning Show Personalities Q Score rankings.

Here are the rankings from all adults surveyed, in order of Positive Q Score:

New, successful competition in the late night TV landscape is forcing networks and cable channels to adapt a more hip tone in an effort to reach a growing younger demographic. Jimmy Fallon‘s “Late Night” and “Tonight Show” viral video run, as well as Kimmel’s online presence has set the table for the new age of post-11 p.m. television.

On our second chart, Conan O’Brien makes a nice run towards the top, but cannot unseat Colbert. Likewise, Hall stays in the basement, despite picking up an additional point.

Here is how the youthful, often early-adopting and trend-setting 18-34 demographic ranked the late night hosts, in order of Positive Q Score: