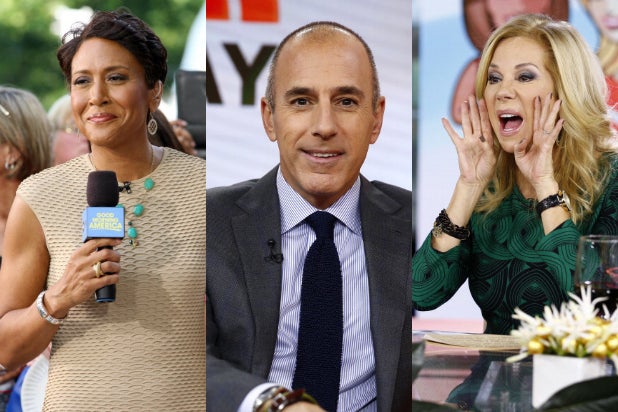 It takes love to want to wake up to the same face every morning — and TV executives know that better than anyone. Which is why they do so much research into choosing morning talk show hosts.

If you’ve ever watched morning television and wondered, “Who picked this guy?,” well, in some ways, you did. Networks rely heavily on a company called Q Scores that uses an industry standard for gauging a celebrity’s likability.

By surveying groups of 1,800 viewers, they are able to tell if a given personality is a Tom Hanks — the guy who consistently tops Q Score rankings. Q Scores executive vice president Henry Schafer told TheWrap that his numbers can sometimes make or break a career.

When it comes to morning shows, it may not be surprising that “Good Morning America” — the top a.m. news broadcast — has the most high-scoring morning personalities, led by Robin Roberts.

To create the scores, Schafer’s team provides a personality’s name and a brief description. They don’t offer photos because those can skew judgements. Then respondents are asked how they feel about a person. Hanks scores in the 50s. The average Positive Q Score for a celebrity is 15, and the average for a host of any kind of news show is a 13.

Robin Roberts, whose heroic cancer fight last year was a major focus of “GMA,” has a Positive Q Score of 29 as of Sept. 2013, the latest available numbers at the time — the best in the morning. No. 2 is her former colleague Sam Champion, who recently left “GMA” for The Weather Channel. He has a 25 positivity score. Third on the list is another “GMA”er, Josh Elliot.

The highest-rated non-“GMA” personality is “CBS This Morning” journalist Norah O’Donnell, who earned a 19.

In fifth is Al Roker, who has a 14 and is the first “Today Show” personality to make the list. He’s tied with colleague Willie Geist, whose been mentioned as a possible, eventual replacement for Matt Lauer — who has a lowly 7.

Years ago, Lauer’s Positive Q Score was in the mid-20s — well above average — before he took a hit over Ann Curry’s exit.

“He had the image, whether he was responsible, of moving around the female anchors,” Schafer said.

“Today” 9 a.m. host Kathie Lee Gifford is one of the most recognized names on the list. But to know her isn’t necessarily to love her. She scores a 5.

Read the full list for network morning show personalities; again, data is as of Sept. 2013, which was the most recent data available at the time of this writing. Who do you like? Who do you hate?