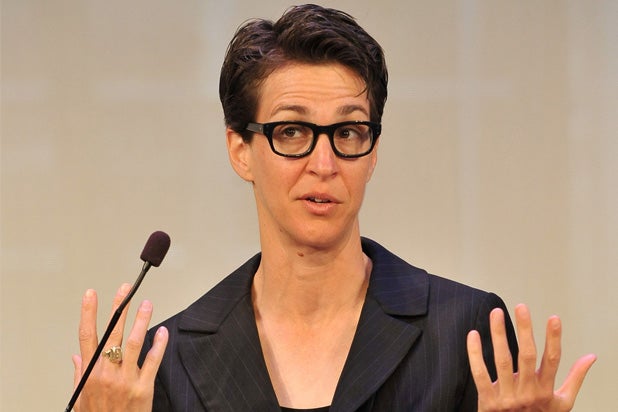 MSNBC’s “The Rachel Maddow Show” has been on fire, coming off its most-watched week since 2008. But Tuesday’s big reveal of Donald Trump’s tax return left viewers disappointed and showed that president Trump actually paid a ton of taxes, at least in 2005.

Maddow sent the media industry into a frenzy less than 90 minutes before her show kicked off by tweeting, “BREAKING: We’ve got Trump tax returns,” adding, “seriously,” to increase the level of anticipation. Eventually she clarified, explaining that she only had Trump’s 1040 form from back in 2005. But the buildup was already significant enough that most seemed to expected some sort of bombshell.

When Maddow’s program finally started, she spent the first segment explaining why it’s so important that everyone knows what’s on Trump’s tax returns. After the Twitter hype and lengthy monologue, it was time for the big reveal: Trump paid $38 million in federal income taxes on a reported income of $150 million back in 2005.

CNBC’s Jay Yarow wrote that it was “not a huge deal,” and “this story has created the appearance that Trump does in fact make a lot of money, and he pays millions in taxes.”

In addition to letting down viewers — some of whom immediately took to Twitter to mock the reveal — she was also scooped by her own guest. Daily Beast contributor David Cay Johnston unearthed the documents, the Daily Beast releasing a summary of the tax return before Maddow’s show began.

Maddow’s Tuesday program is now being described as a modern version of the infamous moment when Geraldo Rivera opened Al Capone’s vault to reveal, well, nothing. In fact, both Rivera and Capone started trending on Twitter shortly after Maddow’s reveal.

On Monday night, Fox News host Sean Hannity called Maddow one of the “worst examples” of “propaganda press.” Hannity’s comments seemed like an everyday attack on a cable news rival, but in some prominent media critics’ eyes, it turned into reality just 24 hours later.

Maddow has been accused of trolling viewers for ratings by Mediaite’s Jon Levine, while Washington Times declared it a victory for Trump. It was called a “nothing burger” by numerous publications and CNN’s Dylan Byers wrote that many journalists feel Maddow “undermined legitimate inquiry into Trump’s tax returns.” The New York Times even called Maddow’s reveal “less groundbreaking than the mere fact that a portion of the president’s records had surfaced at all.”

Shortly after Maddow’s reveal had left viewers with more questions than answers, Hannity called her a leader “of the alt-left, propaganda, destroy-Trump-at-all-costs media.” Fox News even displayed a graphic that accused NBC of “corporate jihad” against the president.

Even Hillary Clinton’s 2016 campaign press secretary Brian Fallon was left disappointed, tweeting “Dems should return focus to Trumpcare tomorrow & the millions it will leave uninsured, not get distracted by two pages from ’05 tax return.”

It will be interesting to see if the “nothingburger” results in viewers shying away from Maddow, who racked up MSNBC’s largest total viewer audience ever in the 9 p.m. ET timeslot during the month of February. She has also beaten Fox News among the key news demo of adults age 25-54 several times in the past two weeks.

Maddow was hot and her viewers typically tune in because she hold’s Trump accountable, but it remains to be seen if the same viewers will hold the MSNBC star accountable for making much ado about nothing.