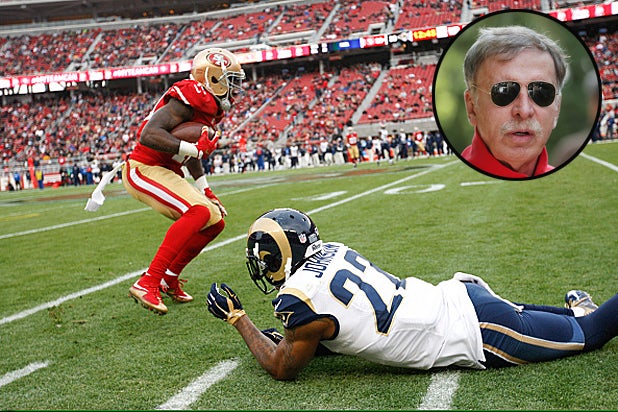 The Rams are officially coming back to Los Angeles, the city they called home from 1946-1994.

After months — and even years — of speculation, the decision was made Tuesday during a meeting of NFL team owners in Houston, Texas, following a vote of 30-2 in favor.

But it wasn’t easy, even for those influencing the multimillion-dollar move from St. Louis, Missouri.

“This has been the most difficult process of my professional career,” Rams owner Stan Kroenke said in a statement obtained by TheWrap. “While we are excited about the prospect of building a new stadium in Inglewood, California, this is bittersweet.

“St. Louis is a city known for its incredibly hard-working, passionate and proud people. Being part of the group that brought the NFL back to St. Louis in 1995 is one of the proudest moments of my professional career. Reaching two Super Bowls and winning one are things all St. Louisans should always treasure,” he said.

The Rams will now relocate to the country’s second-largest media market in time for the 2016 season, most likely playing at the Los Angeles Memorial Coliseum (home of the USC Trojans) until their new stadium in Inglewood is built, which is projected to be in 2019.

“While there understandably has been emotionally charged commentary regarding our motives and intentions, the speculation is not true and unfounded,” Kroenke continued in response to negative backlash from disgruntled St. Louis fans. “I am a Missouri native named after two St. Louis sports legends who I was fortunate enough to know on a personal level. This move isn’t about whether I love St. Louis or Missouri. I do and always will. No matter what anyone says, that will never change.

Also Read: CBS Sports Head on Battling Rivals for Thursday Night NFL: 'We Have an Advantage'

“This decision is about what is in the best long-term interests of the Rams organization and the National Football League. We have negotiated in good faith with the Regional Sports Authority for more than a decade trying to find a viable and sustainable solution. When it became apparent that we might not be able to reach an agreement, it was then and only then that we looked at alternatives.”

Meanwhile, the San Diego Chargers still have the option to also move to L.A., and are being allowed until through Jan. 16, 2017, to make a decision, according to ESPN analyst Adam Scheftler.

“My goal from the start of this process was to create the options necessary to safeguard the future of the Chargers franchise while respecting the will of my fellow NFL owners,” Chargers owner Dean Spanos said. “Today we achieved this goal with the compromise reached by NFL ownership. The Chargers have been approved to relocate to Los Angeles, at the Inglewood location, at any time in the next year.

“In addition, the NFL has granted an additional $100 million in assistance in the event there is a potential solution that can be placed before voters in San Diego. I will be working over the next several weeks to explore the options that we have now created for ourselves to determine the best path forward for the Chargers.”

The Oakland Raiders have bowed out of a move, though the team may have an option to change their minds if the Chargers opt to remain in San Diego.

Kroenke has proposed to build a $1.86 billion stadium in Inglewood, which is located southwest of downtown Los Angeles. The Lakers and the Kings played at the Forum in Inglewood until both teams moved to Staples Center in 2000. In 2014, Kroenke bought a 60-acre tract in the area, and he later added land where the old Hollywood Park Racetrack stood. Last January, he announced plans to build a domed stadium surrounded by an entertainment district.

See tweets from Rams fans objecting to the move below.

Feel for ya, #Rams fans. Here's hoping Kroenke gets stuck in eternal bumper-to-bumper traffic purgatory with his voice looping on the radio.

In 2016 you can follow any team from anywhere so easily. Why would LA fans suddenly drop their favorite team for lousy Rams?

The Rams are like ur ex who dumped u when she went off to college. But now, she's divorced, drunk & needs a ride home from the HS reunion.

I grew up without a football team, but the Rams are all my boy knows. He's devastated. Sad for him. pic.twitter.com/WEwtFEoIrC

Rams fans, I know you're sad, but it could be worse… You could be Jets fans and your team could be staying in your city forever.

California may have the rams but at least we have water

If the Rams leave I will free all the zoo animals. You have one hour.