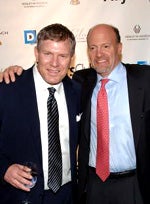 In 2008, Randall Lane, then-publisher of a handful of glossy magazines targeting day traders, partnered with Lenny Dykstra — the chaw-spewing former New York Mets and Philadelphia Phillies star turned unlikely stock-picking “guru” — to publish “The Players Club,” a business magazine targeting professional athletes. (At a time when most magazines were pulling back on excessive spending, the Player's Club launched with a splashy, $400,000 party at New York's Mandarin Oriental Hotel.)

That relationship quickly unraveled – with Lane suing Dykstra over unpaid bills, and Dykstra issuing an explosive counterclaim just a month after the first issue was published — as did Lane’s Doubledown Media business soon after.

“The combination of the media depression, the Wall Street implosion and the credit slowdown were collectively too much for our company—probably any company in our shoes—to overcome,” Lane wrote in a memo in early 2009 announcing Doubledown’s shutdown. (Two months later, legal documents revealed more than 350 claims against Doubledown by ex-employees, investors, vendors, designers, writers, lawyers and more.)

But now Lane is back with a book – “The Zeroes,” due to hit shelves on Tuesday – claiming Dykstra was secretly paid $250,000 by one company to plug its stock on TheStreet.com, the website owned and operated by CNBC “Mad Money” host Jim Cramer.

Lane, now an editor-at-large for the Daily Beast, admits that Cramer likely “had no knowledge of Dykstra's 'pay to plug' scheme — an arrangement that could well lead to a Securities & Exchange Commission investigation.”

But his “relentless endorsements and promotion of the ballplayer's stock-picking over the years” elevated Dykstra to the point where he could pull off scams like this one.

With “Cramer's effusive blessing,” he landed profiles on HBO and the New Yorker, and, eventually, a spot in Lane’s publishing stable.

Cramer responded to TheWrap: "I haven't read the book but as the author, Randall Lane, points out I knew nothing about this issue. Of course it is terribly disappointing."

According to Lane, Dykstra "has now filed for personal bankruptcy, and last year admitted to living in his car."

Something tells me Dykstra has a book in him, too.