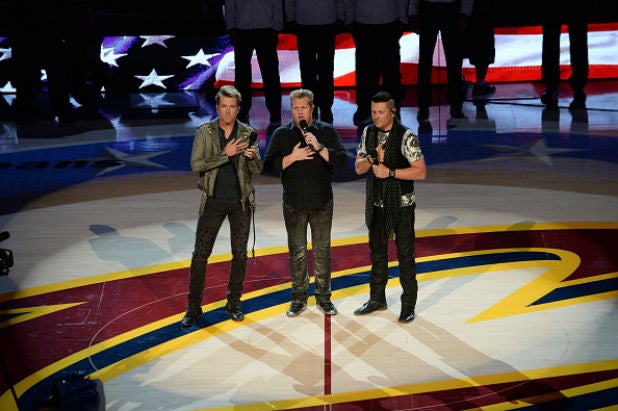 Country rockers Rascal Flatts belted out the national anthem before Tuesday’s Game 3 of the NBA Finals.

The Columbus, Ohio, natives had the honors in their home state before the Cleveland Cavaliers took on the Golden State Warriors at the Quicken Loans Arena in Cleveland.

The NBA announced on Monday that Usher, who became a Cavaliers part-owner in 2005, will follow in their footsteps and perform “The Star-Spangled Banner” for Thursday’s Game 4.

It’s not the first time that Grammy winners Rascal Flatts have sung America’s most famous song at a sporting event, having done the honors before Game 4 of the 2013 World Series.

While most fans praised their performance on Tuesday, some wondered what the “Why Wait” country crooners had to do with the NBA.

“Nothing says NBA basketball like Rascal Flatts,” said one Twitter user, while another wrote: “Rascal Flatts singing the national anthem in Cleveland is fitting.”

Going into Tuesday’s game, the LeBron James‘ Cavaliers and Stephen Curry‘s Warriors were tied at 1-1.