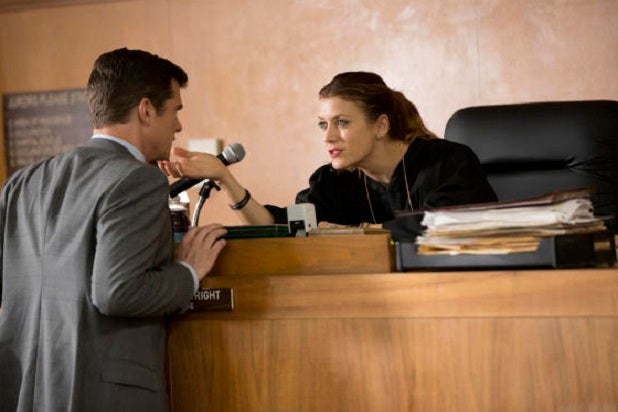 Going against CBS’s “Thursday Night Football,” NBC’s “Bad Judge” and “A to Z,” along with Fox’s “Gracepoint,” drew lukewarm ratings with their premieres on Thursday night, according to preliminary numbers.

The new Kate Walsh series “Bad Judge,” premiering at 9 p.m., drew a soft 1.3 rating/4 share in the 18-49 demographic most important to advertisers and notched 5.9 million total viewers. The freshman romantic comedy “A to Z” followed at 9:30 and fared similarly, posting a 1.2/3 in the demo with 4.8 million total viewers.

Versus last September’s premiere of the short-lived “The Michael J. Fox Show,” “Bad Judge” was down 41 percent in the demo, while “A to Z” was down 43 percent.

Prior to “Gracepoint,” Fox aired “Bones” at 8, which was down marginally in the demo versus last week with a 1.5/5 but held even in total viewers with 6.3 million.

The big — and predictable — winner of the night was “Thursday Night Football” on CBS. While the network’s numbers are approximate due to the nature of live sports, CBS currently holds a handy first place in the demo and total viewers with a 4.2/13 and 12.4 million. “NFL Kick-Off” at 8 posted a 2.8/10 with 10 million total viewers, while the game itself between Minnesota and Green Bay drew a 4.4/13 with 12.9 million total viewers, making it the most-watched program of the night.

Univision was fifth in ratings and total viewers with a 1.1/3 and 39 million.