Buffeted by a severely declining ad market, Variety’s parent company is putting a major portion of its US division up for sale again and has replaced CEO Tad Smith, the company announced on Thursday. 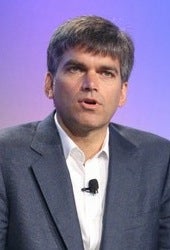 Variety is not among the properties for sale, but Broadcasting & Cable, Multichannel News and the consumer electronics trade Twice will be put on the block.

The parent company’s profits have plunged 48 percent during the first half of this year, and shares on the London Stock Exchange took a 14 percent dive after the second quarter earnings were announced, and the outlook for the second half of the year revised downward.

The move reflects a weakened position for the publishing giant at a time of massive restructuring and decline for all print media.

Smith was said to be leaving "to pursue a new job challenge."

RBI’s US operation, which includes more than 80 trade publications, was put up for sale last year, and then taken off the market near the end of the year after at least one buyer cut its offer dramatically.

At the time, parent company Reed Elsevier had said it did not see a future for print-oriented news publication and would be focusing on growing its data-oriented properties.

But the buyers in the market at the time — Bain Capital, Apollo Management and an alliance led by a group of banks — kept lowering their bids, and ultimately did not meet RBI’s $2 billion asking price.

At the time, the bids dropped to about $900 million, and that included Variety, RBI’s crown jewel.

Since then, the advertising market has continued to be deeply depressed, including for Daily Variety, which often is published with no or almost no advertising. 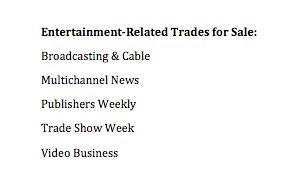 But RBI may be deciding to keep that trade, traditionally the most profitable property at the company, because its brand is so strong. The company may also be waiting out the awards season, when the trade traditionally makes most of its money.

The more difficult question will be who might be inclined to buy several dozen print trade publications at a time when print is dying, and without the sex appeal of Variety to draw a buyer.

"This has been a difficult decision to reach," said Jones in a prepared statement. "There are many strong brands here, with very experienced and professional teams running them, but we have concluded that they are less well suited to RBI’s strategy going forward," said Jones.

"We have decided to focus our efforts and investments on a narrower range of brands and markets. We have to contend with a far harsher advertising environment than any of us have experienced before and, in such a climate, we have to focus not just on innovation and efficiency, but also on ensuring that our portfolio is well-matched with our long-term ambitions."

Longtime editor Peter Bart was moved aside in April and Tim Gray promoted to run the Variety newsroom. Publisher Neil Stiles, who is considered close to RBI chief Jones, will remain in place.

In April, Stiles said the trade would be looking to start charging for online content, but thus far no such plan has been implemented.

Variety has gone through successive staff reductions over the past six months, including about 30 staffers in January, and another set of reductions in April that reduced the headcount by seven percent.

At the time, Smith attributed the cutbacks to the fact that “our quarterly forecast for the full year and the revenue outlook [that] continues to concern us.” According to Smith, Reed’s financial projections are “worse than our already conservative expectations for 2009.”

Stiles has had reporters meeting with sources to see what kind of content the trade can produce for which the trade might charge fees.

Here is the full list of properties RBI has just placed up for sale:

Properties to be retained are:

Reed Construction Data (http://www.reedconstructiondata.com) is a leading North American provider of construction information through a diverse portfolio of innovative products and services.

Variety (http://www.variety.com) is the leading publication for entertainment news, recognized and respected throughout the world of show business.

LA411 (http://www.la411.com/) is the most trusted and widely used entertainment production resource in Southern California.

BuyerZone (http://www.buyerzone.com) is the leading online marketplace for buyers and sellers of business products, services and equipment in the United States.