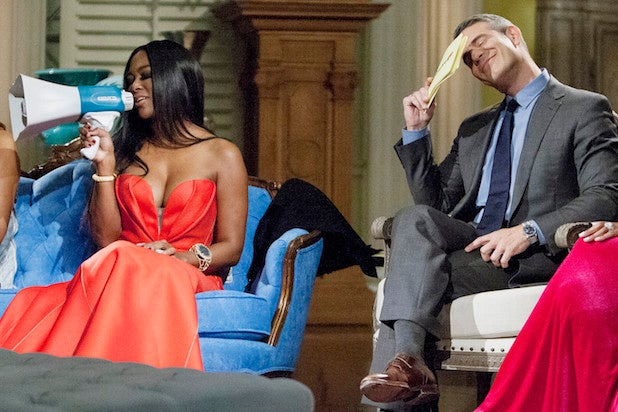 A top producer from “Celebrity Apprentice” told TheWrap they have “absolutely no knowledge about a bullhorn being taken from production.”

Representatives for Kenya Moore told TheWrap that these claims are absolutely “untrue” and that they spoke to “Celebrity Apprentice” executives who also said Kenya didn’t take anything from the set.

On the heels of “Celebrity Apprentice’s” Phone-gate in which “Real Housewives of Atlanta” star Kenya Moore was accused of swiping Vivica A. Fox‘s smart phone during shooting, comes claims that a bullhorn from the set also went missing.

“During filming, we all noticed one of our famous ‘Celebrity Apprentice’ bullhorns used on challenges was missing,” the insider told TheWrap. “We couldn’t find it anywhere. We even talked about the M.I.A. prop on the series, but the segment didn’t air. It was weird, but we just shrugged and moved on.”

But, apparently, the staffer believes the mystery of the missing bullhorn has been solved.

During “Real Housewives of Atlanta’s” Season 6 reunion, which filmed right after “Celebrity Apprentice” wrapped taping, Moore whipped out the exact same bullhorn used on the NBC reality TV series in one of her infamous stunt tirades against cast mate Porsha Stewart, which would later lead to a notorious physical altercation between the two housewives.

A “Celebrity Apprentice” spokesperson was unable to confirm or comment on this story. TheWrap is awaiting comment from Moore.

Moore denied the accusation, while a defiant and confident Fox still maintains the former housewife was behind the reality TV malfunction.

Fox referred to Moore as “a cold lying thief” in TheWrap’s interview with her earlier this month.

The “Kill Bill” actress says she never got back her phone.