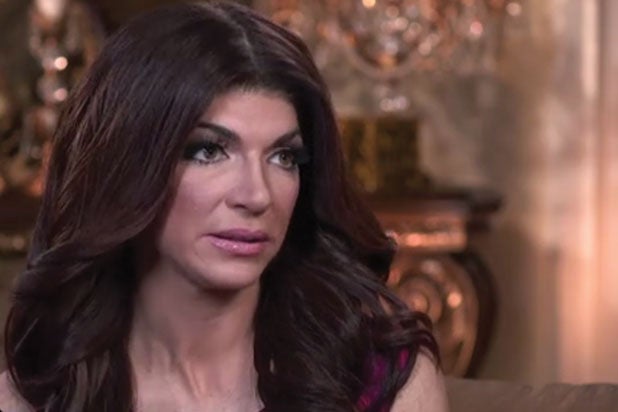 “Real Housewives of New Jersey” star Teresa Giudice said prison was like “living in Hell” in her first interview since being released in December.

“I mean, there was mold in the bathrooms,” the reality star said of Connecticut’s Danbury Federal Correctional Institution in an ABC News interview that aired on “Good Morning America” Tuesday. “There was not running water constantly. The showers were freezing cold … I mean, the living conditions were really horrible. Like, horrible.”

Giudice said her cell was nicknamed “the boom-boom room,” because her cellmates would constantly have sex in there.

“When I first got there I bought headphones the next day … So thank God for commissary,” she said. “But I just went underneath the blanket. And we had a fan in our room. Like, this huge fan. And they would put that on every single night, so you can’t hear anything.”

Giudice revealed that she spent her days doing yoga, and working in the kitchen wiping tables three days a week, for which she earned 12 cents an hour.

See Video: Teresa Giudice Reveals How Prison Turned Her Back Into a Virgin in 'Teresa Checks In' Finale Sneak Peek

The east coast-dwelling reality star served nearly all of the 15 months to which she was sentenced in October 2014, after she and husband Joe pleaded guilty to 41 cases of bank, mail, wire and bankruptcy fraud. Although released from prison in December, she stayed under house arrest till last Friday and was also required to pay $414,000 in restitution, ABC News reported.

Although she was forced to be away from her kids during her time in prison, and will not see her husband for 41 months when he begins his sentence in March for hiding assets, submitting fake loan applications and failing to pay taxes, she told “GMA” that she never blamed him for anything.

“There was legal people around us also when I signed those papers and something that happened and I’m not going to look back,” she said.

Giudice claimed that she never even knew she was doing something illegal.

“There was no intent to commit a crime. I didn’t know I was committing a crime …,” she said. “I got sentenced. I got served time. I did what I had to do and now I’m moving past it.”

Giudice has been one of the incendiary favorites from the Bravo unscripted series since its debut in 2009. She’s authored three cookbooks, has a hand in haircare, and ready-to-drink cocktail lines. She also appeared on Season 5 of “The Celebrity Apprentice.”

She will also return for the seventh season of “Real Housewives of New Jersey,” Andy Cohen confirmed on his SiriusXM show, “Radio Andy,” on Monday.

“We were shooting when Teresa left Danbury, when she got home, we’ve been shooting for the last few months,” he said.

Bravo also confirmed the news, saying she will return later this year.