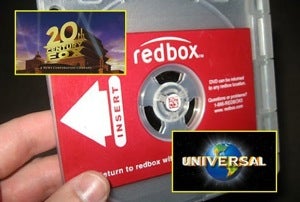 Redbox’s war against the Hollywood studios achieved detente on Thursday.

The kiosk movie rental operator reached an agreement with final two holdouts, Universal Studios and 20th Century Fox, to respect a 28-day delay on when it can rent new releases.

In exchange for honoring the release window, Redbox will get new releases from Fox and Universal at a lower cost once the 28 days are up.

The deal means Redbox’s protracted legal battles with movie studios are over.

Redbox reached a similar agreement with Warner Bros. in February.

(Read also: Redbox Chief Defends His Business: "We Are an Engine for Industry Growth")

Following the refusal by several major studios to sell new releases to Redbox until nearly four weeks after their street date, the company filed a lawsuit against Universal in October, charging the studio with violations of antitrust laws.

That suit was followed by two others in August 2009 against Fox and Warners.

As part of the deal with Fox, Redbox also agreed to destroy the studio’s DVDs and Blu-ray discs after it stops renting those titles.

The new arrangement will go into effect with Thursday’s release of Fox’s "Avatar" and next week’s release of "It’s Complicated."

The lower price point the studios receive on Redbox’s $1 rental fees, compounded with a mounting belief on the part of the industry that these cheaper rental fees were cannibalizing sales of new releases, led to nearly two years of legal wrangling.

There are signs now that Hollywood has at long last mended fences with Redbox and Netflix, the other new player on the movie rental scene. Netflix has signed similar pacts with Fox, Universal and Warner Bros. over the past few months in which it agreed to respect release windows while getting greater access to catalog titles for its streaming service and new releases at lower cost. In turn, the studios believe that by limiting the availability of hit movies, they can goose sales of DVDs and Blu-rays.

The new rental landscape is particularly hospitable to Blockbuster. The struggling rental chain has emerged as the studio’s preferred destination for new releases, in large part due to its higher rental fees.

While movie studios have been pressuring Netflix and Redbox to agree to a delay on new films, Hollywood has been easing Blockbuster’s access to new movies.