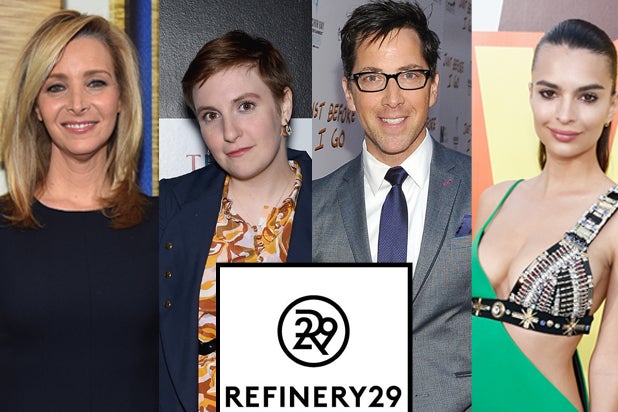 “We are excited to expand upon our winning foundation of style and how-to videos by creating content that is for, by, or about women,” said Amy Emmerich, executive vice president of programming at Refinery29.

“Our 2015 video slate will roll out premium programming with award-winning creative talent that puts women first, elevates her every day and inspires her to challenge convention,” she said. “Through our deep audience connection and breadth of storytelling, we will continue to create a dialogue with this powerful generation of women around topics that matter.”

Refinery29, the self-described No. 1 media company for millennial women, began offering video content last spring with the debut of the original programs, “I Am Icon’ and “Style Out There.” The company plans to more than double its video offerings this year, distributing R29 Originals across multiple platforms, including Facebook, YouTube, Snapchat, and more.

Currently 130 million women engage with Refinery29 content each month across the combined reach of all the site’s platforms, and site traffic has doubled in audience year over year consecutively for the past five years, the company boasted during Wednesday’s NewFronts presentation.

Here is Refinery29’s 2015 programming slate, in its own words:

“S*!tty Boyfriends” – An original series from New Form Digital in partnership with Is or Isn’t Entertainment, with executive producers Lisa Kudrow and Dan Bucatinsky, the makers of the award-winning series “Web Therapy,” and Kathleen Grace, this scripted narrative follows Amanda, who, desperate for a new perspective on her dating life, turns to her single, Internet-savvy Auntie Katie to tackle the question that every generation asks: “How do I find love?”

“The Skinny” – A co-production with wifey.tv, co-founded by Jill Soloway and Rebecca Odes, “The Skinny” is a dark comedy series about a feminist comedian in Los Angeles trying to live, love, and get over her bulimia. Jessie Kahnweiler writes, directs and stars in this episodic series, alongside indie veteran Illeana Douglas.

“Throwback” – In collaboration with production company World of Wonder, Refinery29 takes some of today’s hottest talent, unique personalities, artists, and musicians, and transform them into iconic “It Girls” from different fashion eras, such as Edie Sedgwick, Cher, Twiggy, and more.

Documentary
“Fashionably Bound” — Refinery29’s expands its foray into virtual reality with a series that takes viewers on a stylish journey across continents for a 360-degree adventure.

“One Look” – Following the success of pilot episodes with Dior Haute Couture and Marc Jacobs, “One Look” is a glimpse into the world of Haute Couture; from the stress of the seamstresses to the meticulous handwork of specialized craftsmen to the multi-million dollar set designs, “Visionaire” explores the various elements that make Couture Week the best fashion show on earth.

“Style Out There” – Continue the journey with Refinery29 in Season 2 of “Style Out There,” exploring the globe to document the world’s style subcultures. From the beautiful, transgender Hijra community in India, to the fun-loving Decora girls of Tokyo, we shine light on untold style stories from around the world.

“Get Real” – The Refinery29 team challenges what’s considered “normal” about the human body through deep narratives that celebrate individual bodies–and all the qualities and quirks that make them unique.

“We Are The XX” – Kassidy Brown and Allison Rapson, co-founders of We Are The XX, travel across the globe and join arms with female revolutionaries, leaders, and activists to document the front lines of feminism.

“Trendsetters of Tehran” – In collaboration with Hot Snakes Media, Refinery29 lifts the curtain on stylish women in Tehran, Iran, exploring how they defy conventions and embrace self-expression by working to change the conversation in a society that has historically held them back.

“Dear L.A. With Jenn Im” – YouTube star Jenn Im has once again teamed up with Refinery29 for a new series that explores how personal style is not just about clothing. Through a variety of formats, Jenn will take viewers along for a look into the homes, beauty routines, and culinary secrets of some of her favorite people to discover exactly what defines someone’s “style.”

“Sound Off” – Refinery29 explores how style both influences and reflects music culture across the globe. The series celebrates not only how women are making strides in music, but how their personal style permeates and influences their musical style.

“Refined Wisdom” – A series of intimate conversations between emerging female directors and the feminist icons Refinery29 admires, bringing viewers a fierce look at the truth-talking dames of fame and their worldly insights.

“Four Elements and Fashion” – A cinematic series that vividly captures fashion as the four natural elements: silk with water, polyester with fire, chiffon with air, and cotton with earth. Advanced cinematographic techniques will give viewers an up close view of the way the material interacts with the elements.

Also Read: Jerry Seinfeld Declares 'TV Is Over and There's Nothing Special About It'

“Gender Bender” – Refinery29 editors and guests explore the world of androgynous style, proving that your gender shouldn’t limit your style or how you dress.

“What’s in Your Bag? With Esther Povitsky” – Comedian — and millennial woman — Esther Povitsky rifles through individuals’ bags, trunks, and other private areas to see what the contents reveal about them.

“8 Things To Know” – Stay in the know with this daily video manifestation of Refinery29’s “8 Things,” an editorial franchise that provides viewers with eight ripped-from-the-headlines topics to know when they start their day.

“Macro Makeover” – The Refinery29 team will show viewers how to revitalize their beauty routine and master unexpected beauty tips with magnified, tight visuals that demonstrate each step in minute detail.

“Beauty Prep School” – Easy-to-follow tutorials where Refinery29 shows viewers how to build up a serious beauty repertoire and master the basics in hair, makeup, and nails.

“A Cut Above” – Pick up your sharpest knife and learn how to chop, dice, slice, and carve even the most unwieldy foods like a chef in these colorful, playful, and informative stop-motion cutting tutorials.

“60 Seconds To Fit” – Refinery29’s fitness and wellness editors provide daily fitness tips that viewers can master in just 60 seconds. Each move will focus on a body part, and will be tailored for beginner, moderate, and advanced exercisers.

“Hack Your Heart Out” – An epic visual journey highlighting a wide array of lifestyle DIY hacks, tips, and crafts that teach the viewer how to get it done in timely, unconventional, and stylish ways.

“Trend Takeout” – Refinery29’s senior style editor, Annie Georgia Greenberg, will walk us through how to wear the latest trends by styling one trend piece into three separate looks, all filmed inside the Refinery29 closet.