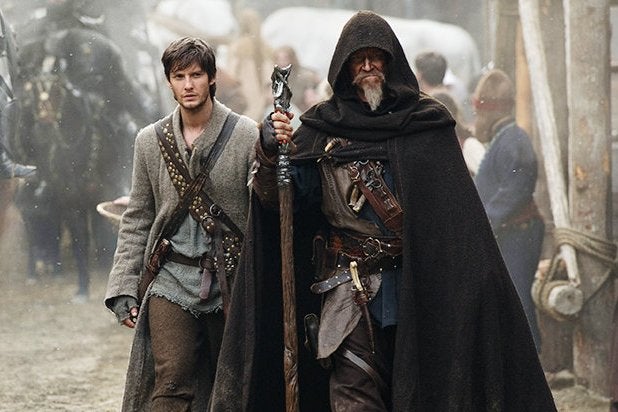 Even before the opening title sequence of “Seventh Son,” a fantasy epic whose troubled production and long-delayed release tell a tale far more compelling than the film itself, Julianne Moore‘s evil witch croons the tip of the film’s exposition iceberg: “My power awakens with the rise of the blood moon.” She then transforms into a dragon and flies at the camera roaring and bellowing. In 3D.

Like the other pushed-back, pumped-up would-be blockbuster opening this week, “Jupiter Ascending,” “Seventh Son” feels like the cinematic equivalent of cheese-stuffed pizza crust, or a sandwich in which fried chicken serves as the bun: concerned that our palates have become numbed by excess in the past, these films offer us an excess of excess as the antidote, alternating between exposition and explosion as required, and interrupted by CGI-heavy action scenes every 10 minutes to jolt our bored nerves into something like attention. It’s not a tactic that works especially well in either case.

See Video: Jeff Bridges May Put You to Sleep With His Squarespace Super Bowl Ad (Video)

Directed by Sergei Bodrov (“Mongol: the Rise of Genghis Khan”), “Seventh Son” is a chosen-one-is-mentored-to-fight-evil story so off-the-rack that it still has the tags on it. Based on Joseph Delaney’s novel “The Spook’s Apprentice,” with screenplay credit to Stephen Knight (“Locke”) and Charles Leavitt (“In the Heart of the Sea”), it’s set in a fantasy kingdom where Jeff Bridges plays Master Gregory, an aging knight of the order known as the Falcons (informally known as “Spooks”), dedicated to wiping out the evil supernatural beings that plague the land as a combination of exorcist, game warden and cop. Bridges plays the part with such a mumbled, grumbled vocal tone it makes it nigh-impossible to hear half his dialogue, and the half you can hear is transformed into unintentional comedy as it dribbles out of his lips like cold gravy.

Gregory finds his latest apprentice in Tom Ward (Ben Barnes, “Sons of Liberty”), a seventh son of a seventh son. Gregory needs an apprentice because his old nemesis, Mother Malkin (Moore, providing a level of ham so cultured it’s really more like jamón ibérico), has escaped the prison he put her in and — as noted in the pre-credit sequence — the coming of the blood moon is making her a threat yet again.

Look at the production team for “Seventh Son” and you stand slack-jawed in awe: the cinematographer is Newton Thomas Sigel of “Drive” and “The Usual Suspects.” The music is by Marco Beltrami of “Snowpiercer” and “The Hurt Locker.” The production design is by Dante Ferretti of “The Aviator” and “Shutter Island.” John Dykstra of “Star Wars,” “Silent Running,” “Godzilla” and “Caddyshack,” is credited as the visual effects designer. But the film those luminaries have made is all slack and no awe; many of the scenes feel like they’re being shot through a foot-thick protective layer of Vaseline, with outside shots bathed in a murky, dirty-dishwater light that isn’t helped by the film’s 3D. The music is just noise. And the sets look as if the Max Fischer Players decided to pay tribute to “Game of Thrones,” while the effects are competently adequate, in service of a bland and busy script.

The plot’s familiar menu of betrayals and bonding, combat and confessions, mystical whatsits and long-standing prophecies is also a problem, up to and including Tom’s romance with part-time witch Alice (Alicia Vikander), which leaves Tom torn between Gregory’s imperatives of duty and her big brown eyes. When Tom notes that he couldn’t bring himself to kill a sorcerer by burning him alive, Alice explains “To be no good … at something bad … is good,” a howler of a line that sits alongside dull discussions of destiny, boring interpretations of visions and three film’s worth of villainous shapeshifters, spellcasters and swordsmen being hurled at us in the hopes we’ll care about any of them.

“Seventh Son” aspires to the same majesty — and box office — as the “Lord of the Rings” films, but it’s so clumsily made and creakily written it’s hard to imagine that happening. I know that it’s an easy joke to suggest that a film should have gone straight to video, but “Seventh Son” feels like it was made to go straight to “Mystery Science Theater 3000,” where its unintentional comedy could be properly celebrated in the appropriate context. “Seventh Son” tells a story of dragons, witches, ghosts and ogres, but the most fantastic thing about it is the idea that someone thought this lumpy, bumpy and swollen sack of tired tropes and cluttered CGI would attract audiences.