What is the sound of one man flailing?

It’s Tom Cruise trying desperately to turn the jumbled dross that is “Knight and Day” into shiny gold. But It can’t be done, even though Cruise dials up to 11 the intensity and charm and even doffs his shirt – still an impressive sight – a couple of times here. 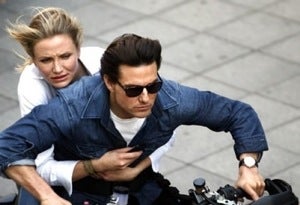 It’s not really his fault. Blame it on co-writer and director James Mangold’s failure to set a consistent tone for this mish-mash of an action comedy, which can’t seem to make up its mind whether it aspires to be another “North by Northwest,” “Misson: Impossible” or just a silly, sophisticated ‘60s caper film like “Charade."

At age 48 (on July 3), Cruise seems to have been a movie star forever. After smaller parts in a few movies, he shot to stardom in 1983 with “Risky Business,” a movie that probably did more for sales of Ray-Bans and boxers than any film before or since.

He instantly became The One. While other promising young actors of the era were grouped together into a constellation known as the Brat Pack, he stood alone in the firmament, shining bigger and brighter than the rest.

The key to his appeal was always his work ethic. He worked harder at stardom and seemingly wanted it more than anyone else. In addition to his toothy killer grin, the thread that ran through every performance was his laser-lock focus and intensity.

Unlike other stars who, once they make it to the top, often work with and bigfoot weaker directors, Cruise always worked with the best. His roster includes Steven Spielberg, Michael Mann, Barry Levinson, Stanley Kubrick (though their collaboration, 1999’s “Eyes Wide Shut,” is a self-important mess) and Oliver Stone. None of these guys are pushovers; Cruise bought into their visions and put himself in service to them.

Though neither he nor we knew it at the time, he probably peaked in 1996 with “Jerry Maguire,” a charming and commercial romantic comedy. Writer-director Cameron Crowe took advantage of Cruise’s intensity while also showcasing a loosey-goosey charm he hadn’t shown to such an extent before or since.

There were plenty of hits in the next decade, including Spielberg’s “Minority Report” in 2002 and two more “Mission: Impossibles” in 2000 and 2006. Even “Vanilla Sky,” a confused 2001 remake of a surrealistic Spanish thriller, managed on the strength of Cruise’s name alone to rake in more than $100 million at box office, though everyone who saw it detested it.

Then, starting with his split from wife Nicole Kidman in 2001, it all fell apart, more because of his personal life than the movies he was making. He has been trying ever since to turn things around.

“Knight and Day,” which he took after 2007’s “Lions for Lambs” tanked at the box office and 2008’s much-delayed “Valkyrie” under-performed, was supposed to be the game changer that would remind fans why they loved Cruise in the first place. His cameo as foul-mouthed producer Lev Grossman in 2008’s “Tropic Thunder” doesn’t count, since he was (a) heavily made up and padded, and (b) wasn’t carrying the movie.

It’s a glossy, big-star vehicle that runs for nearly two seat-numbing hours. We first encounter Cruise at an airport where he accidentally-on-purpose bumps into Cameron Diaz, an auto restorer, and then chats her up on board their flight. After she disappears into the lavatory, he suddenly turns deadly spy gun-assassin.

When the plane’s few other passengers and crew attack him, he violently dispatches them and then, with a screaming Diaz in the cockpit next to him, lands the jetliner — in a nod to Alfred Hitchcock’s far superior “North by Northwest” — in a cornfield.

He’s a rogue government agent and is trying to keep safe a newly invented, superpower battery that the feds and various bad guys want. Or is Cruise the bad guy?

As the movie jumps dizzily from location to location (Boston, New York, the Azores, Austria and Spain), he and Diaz, whom he brings along on the flimsiest of excuses, exchange painfully weak comic banter inbetween bruising car chases and gun battles.

It’s all highly artificial and laboriously constructed, not to mention giving off a strong whiff of desperation.

One can see everyone, including Cruise, huffing and puffing to make a large-scale, glamorous, effervescent movie. What they’ve forgotten is, for such a film to work, the stars behind it have to be so potent, and their characters so appealing, that the audience willingly suspends belief and goes along for the ride.

Not happening here. Instead, the ride just seems endless.

Cruise may yet halt the downslide of his career. But “Knight and Day” won’t be the movie to do it.