It wasn’t the worst Oscars ever, but it may have been the most disappointing.

For months, we’ve been promised that the new producer duo of Shankman and Mechanic were ready to revolutionize the Academy Awards, to shake things up so that the viewer exodus would halt. ABC’s promos promised: "You’ve never seen Oscar like this."

Fact is, we have seen Oscar like this before. Many times. Mostly during the 1980s and early ’90s. 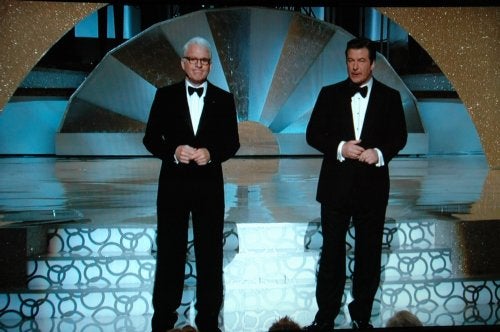 Instead of establishing some new paradigm for awards shows, Oscar 2010 was in many ways like an Academy Awards show from the past — complete with lame dance numbers, awkward host banter and jokes so corny and predictable, you’d think they were written by Bruce Vilanch.

Oh, wait: Vilanch actually was, once again, a writer for the Oscars.

The fact that Shankman and Mechanic couldn’t even see fit to dump Vilanch and his tired schtick is one big reason why this year’s show was more retread than revolutionary.

But it was hardly the only problem of the night.

Let’s start with Baldwin and Martin. They were perfectly acceptable hosts: Charming, respectful and sometimes quick on their feet. They have nothing to be embarrassed about, and that’s no small accomplishment for such a high-risk gig.

But if your goal is to Reinvent Oscar, you don’t ask two very conventional Hollywood insiders to host — and then saddle them with groan-inducing jokes even Jay Leno would roll his eyes at.

After the open, we thought we were going to like the old school vibe of the monologue (or is it duo-logue?) As the night wore on, however it became just plain old.

Sure, a taped parody of "Paranormal Activity" featuring Martin and Baldwin was sly and funny. But it was the exception, with most of the "Odd Couple"-themed banter falling flat (a Snuggie sight gag, guys? Really?)

It says something, and nothing positive, when a promo for "Modern Family" is far funnier than anything scripted during the entire Oscar show. Steve McPherson ought to demand that Steve Levitan, Chris Lloyd and their "Modern Family" crew be put in charge of writing the 2011 show. 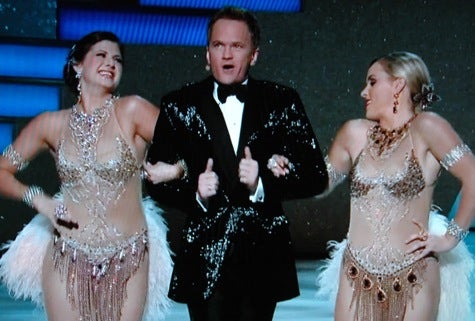 If the hosts were ultimately irrelevant — not to mentioned upstaged by scene-stealer Neil Patrick Harris and his opening production number — they at least didn’t make you actively want to hate them.

The same cannot be said of Hamish Hamilton, the British video director who was brought in to liven up the look of the show. The only thing noticeable about his direction was how awful it was, and how often it failed to capture the moment.

When Kathryn Bigelow won for Best Director, the whole world (well, those of us in Hollywood or who read the tabloid press) was waiting to see how she and James Cameron would interact. We saw him right behind her, but just as it seemed the two might connect– cut to a random wide shot!

The in memoriam tribute began with Patrick Swayze, but only the most eagle-eyed home viewers saw that. Hamilton focused on the crowd rather than the montage when Swayze was shown. Getting so many John Hughes stars on one stage was amazing; not doing a wide shot of them when they were introduced, unforgivable.

And every time someone from "Precious" won, Hamilton felt the need to cut to a show of A Random Black Person With Nothing to Do With the Movie. (That strategy did result in an awesome shot of Samuel L. Jackson’s eye-rolling of Mo’Nique’s acceptance speech, however). 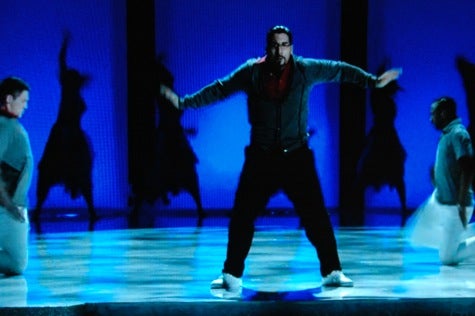 Despite all the talk of Shankman bringing some dance-tastic energy to Oscar, it wasn’t in evidence during the two big production numbers.

Harris was his usual winning self in the opening routine, "No One Wants to Do It Alone." But there was nothing spectacular or remotely groundbreaking about the MGM-worthy open, unless you think a chorus line of showgirls is somehow current.

At least it was classy and retro-cool. The same can’t be said of the snoozefest interpretive dance act used to showcase the best score nominees. Dancers doing The Robot to explain "Up"? Wha?

I have no problem getting rid of the best song performances, if it’s to replace it with something worthy. This wasn’t worthy.

We’re not going to whine about some acceptance speeches being cut off. That’s life in the big, ad-sponsored big city, folks.

But shame on the producers if they decided to speed up the show by having Tom Hanks not read off the list of nominees. We’re hoping Hanks just wanted to speed things up so he could get to the Vanity Fair party, because the suddenness of how he cut to the chase robbed a bit of the drama from "The Hurt Locker’s" big moment.

We’re also still wondering how Farrah Fawcett could’ve been left out of the in memoriam reel. Or how a horror montage that included "Silence of the Lambs" could be introduced by noting no horror film had won in more than 35 years ("Lambs" dominated the Oscars less than 20 years ago).

And whose brilliant idea was it to follow Bigelow’s win with the orchestra playing "I Am Woman"? Again: This was Oscar ’80s-style, not Oscar 2.0.

On the positive tip, the tribute to Hughes was brilliantly edited and very emotional. The tech awards seem to go by more quickly than some years, perhaps because of interesting presenters. Having the animated "stars" shilling for their movies via a junket set was inspired.

Speech-wise, Sandra Bullock was the hands-down highlight. Mo’Nique, meanwhile, got in the best inside Hollywood zinger by starting out with a reference to her non-campaign campaign for the little gold man. And who can’t be happy that we were all spared another immodest speech by James Cameron?

Once again: This wasn’t the worst Oscars ever. Hardly.

Indeed, if you watched whilst checking out Twitter, it was actually quite a fun evening — there’s nothing like mocking a Hollywood train wreck in real time with a few hundred of your snarkiest, most jaded virtual friends.

But if Academy had hoped this year’s telecast would represent a much-needed reboot of the franchise… well, as they might say on the aforementioned Twitter: