It was a beautiful afternoon in late June, a perfect day for a garden party. The stately home in Brentwood was filled with flowers and high-school graduates, while smoke from the grilling of kebabs billowed up along the Italian-style roofline of the house.

Outside in the garden, prominent members of Los Angeles’ Iranian-American community sipped pomegranite mixers and debated the situation in Iran.

The protests are not about the opposition leader, they explained. Moussavi is only a reformer when compared to the current regime.

The desire for freedom is at once deeper and more diffuse. In that sense this movement does not yet have a leader, or a clear goal, and much of it stems from the stifled desires of women for re-emancipation. And the well of anger comes from the sense of rank betrayal in the election.

“If you tell people that you’re going to give them the opportunity to participate in an election, and instill in people the hope that their vote can mean something, and then deny it, there’s a break in trust that’s irreparable,” said David Nahai, the general manager of the Department of Water and Power.

The dizzying speed of events and the global connection to them is driven by modern media technology.

Everyone here — including Nahai and his wife, author Gina; Joe Shooshani, a prominent local developer; and Jacques Barlava, who was the host of the afternoon –  get email updates and exhortations about the latest protests like the one below. 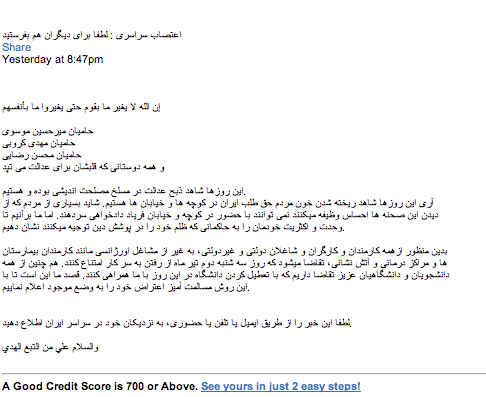 Here's how information passes at the speed of the web, despite the Iranian government’s best efforts to block it.

Someone in Tehran tweets information about the location of a rally. Often those tweets are blocked within Iran, but then someone who receives it outside Iran can spread the information by sending the tweet back to addresses there.

Los Angeles is an integral part of the events going on in Tehran and parts beyond.  So are other cities such as London, where BBC Persian — which often shows the latest Twitter feeds — can be viewed over the Internet.

On Sunday, for example, police had blocked access to a Tehran square where a rally had been planned. One activist called a relative in L.A., who had heard about the rally’s location on satellite TV, and passed it back into the country.

“The discussion goes around so fast, that they can’t stop it,” said Shooshani.

There’s yet another major part of the information flow —  Los Angeles has some 20 different radio and television programs beaming via satellite into Iran, in Farsi.

The programs are geared to a specific audience, to be sure

Lately, KRRN at 670 on the AM dial, has been playing ads recruiting Farsi-speaking Americans to join the CIA. “Benefits and high adventure,” the ad promises — at www.cia/careers.com.

The latest is a call for work stoppages on Tuesday, which were also announced to the locals via email. Nahai and Shooshani explained that if merchants in the Isfahan bazaar have joined urban educated protestors, then another turn of the screw has occurred.

There was talk that Google had announced it would hone in on events live.

There was chatter about a story someone saw on CNN about an American-Persian group sending 10,000 pens with tiny cameras in them, and flash drives embedded in the pens, to gather citizen footage.

A woman called Afsi who works for the World Bank in Washington, D.C., said the events reminded her of the revolution of 30 years ago. At the time, she became a refugee at 14. She and her parents were forced to leave the country as part of the upper class and permitted to bring nothing — just suitcases of clothing.

Afsi recalled being deposited at the home of friends in Los Angeles, the sense of loss and dislocation. “It feels like, ‘Good, now you feel what we felt 30 years ago,’” she said of her view of the regime.

“It’s the beginning of a very long road,” said Nazila Barlava, a local defense attorney. “It will take three or four years, but we will get there.”

To what end? “The end of the mullahs,” she said. “People want change.”