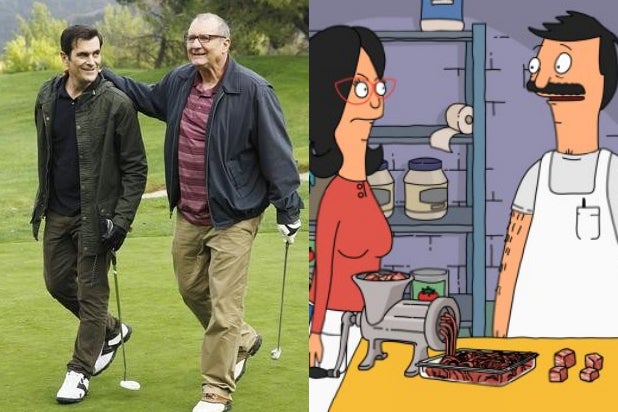 The two comedies are at opposite ends of the spectrum in terms of their average viewers’ median incomes. The median “Modern Family” viewer in the 18-49 demographic rakes in $81,100 annually, according to Nielsen data. “Bob’s Burgers” watchers in the demo, on the other hand, earn around $48,000 per year.

Neither are particularly rich or poor — but the ratings company carefully tracks even minor differences in wealth because advertisers want to wring out as much as they can from the people who watch their shows.

TheWrap found the gap between ABC’s “Modern Family” and Fox’s “Bob’s Burgers” by looking at Nielsen’s average median income of primetime viewers this season for the four biggest broadcast networks — not including sports, specials, or awards ceremonies.

That means ABC, NBC and CBS are sharing the wealth with the top three shows, which also happen to be critical darlings.

“It’s not too surprising that higher income viewers are more likely to watch programs that are critically acclaimed and contenders for industry awards like the Golden Globes and Emmys,” Brad Adgate, senior vice president of Research at Horizon Media, told TheWrap.

Advertisers focus on the 18-49 demo because they hope to land lifelong customers early. But people tend to hit their peak income in their mid-50s, Adgate said.

“If you have say a show that’s really young and really upscale, then you have something,” he said.

“The West Wing” had the highest median income Adgate could recall. Shows on cable, especially premium cable, and Netflix tend to have wealthier audiences — since their viewers must be able to afford to watch them.

The new fall show with the highest median income is “The Goldbergs,” at $73,900. “Very rarely does a first-year show command the ad value of a (longer-running) show,” Adgate said.

Viewers of the doctor-centric “The Mindy Project” (right) have a median income of $73,800. Another medical drama, “Grey’s Anatomy,” may not have as many rich doctors among its fans — it has a median viewer income of $70,500, putting it in 18th place.

“Mindy,” which has the seventh-wealthiest audience, is Fox’s top-ranker in terms of well-off viewers.

A little further down the list is “Shark Tank” — a show about venture capitalists vying to invest in start-up companies. It’s in 16th place with $70,800.

Now for the shows you probably shouldn’t mention on a first date with a gold digger.

Animated shows — including “The Simpsons,” “Family Guy,” “American Dad” and the aforementioned “Bob’s Burgers” — have among the least wealthy audiences. That makes sense, Adgate says, because cartoon viewers skew younger.

Here are the top 10 TV shows with the highest median income in the key demo for the fall season so far:

And the least wealthy, from the bottom up: