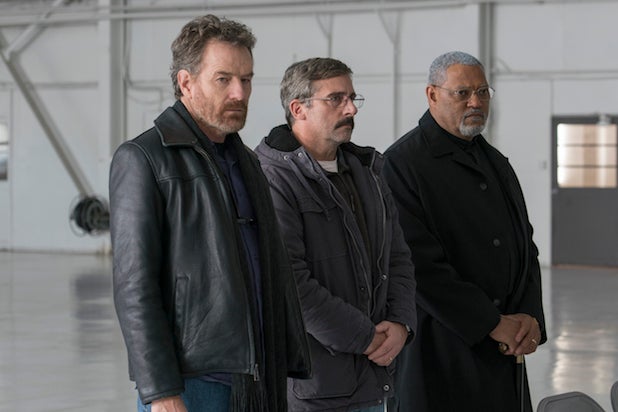 Richard Linklater’s “Last Flag Flying” will have its world premiere as the opening-night film at the 55th New York Film Festival, the Film Society of Lincoln Center announced on Monday.

The film stars Steve Carell, Bryan Cranston and Laurence Fishburne as Vietnam vets who go on a road trip to bury the Carell character’s son, who was killed in the invasion of Iraq.

“‘Last Flag Flying’ is many things at once — infectiously funny, quietly shattering, celebratory, mournful, meditative, intimate, expansive, vastly entertaining, and all-American in the very best sense,” said NYFF director Kent Jones in a statement announcing the selection. “But to isolate its individual qualities is to set aside the most important and precious fact about this movie: that it all flows like a river.”

The film is based on the 2005 Darryl Ponsican novel of the same name. That book was a sequel to Ponsican’s 1970 novel “The Last Detail,” which served as the basis of a Hal Ashby movie starring Jack Nicholson. Originally, Linklater had talked about reuniting Nicholson and Randy Quaid from that movie.

Linklater’s last film was the well-received comedy “Everybody Wants Some!!” His 2014 drama “Boyhood” was nominated for six Academy Awards, including Best Picture, and costar Patricia Arquette won the Best Supporting Actress Oscar.

Over the years, NYFF opening-night films have included 10 Oscar Best Picture nominees and one winner, “Chariots of Fire.” Half of those have come in the last 12 years, as the festival has become a more active player in the fall festival circuit that serves as the launching pad for most of the main awards contenders.

By announcing its selection before the Venice, Telluride and Toronto Film Festivals have named their own choices, NYFF takes Linklater’s film off the table for those festivals, which take place in late August and early September.

Tickets for the 55th NYFF will go on sale on September 10. VIP ticket packages are currently available.