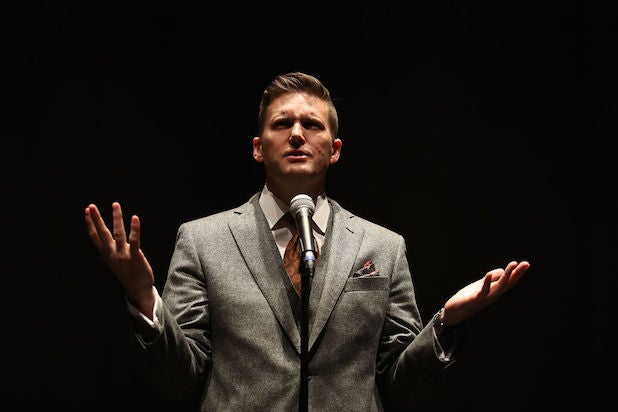 Pages for Altright.com and the National Policy Institute — an organization run by Spencer and “dedicated to the heritage, identity, and future of people of European descent” — were booted off Facebook on Friday, after Vice News brought the pages to the social network’s attention. The two pages combined had about 14,000 followers.

A Facebook spokesperson confirmed to TheWrap that they removed the pages, pointing to the company’s policy against “organized hate groups.” A rep for Spencer did not respond to TheWrap.

Facebook will remove content that they deem targets users based on race and religion, among other traits, according to the platform’s community standards. CEO Mark Zuckerberg said his company won’t tolerate “hate groups” during his congressional testimony earlier this week. “If there’s a group that their primary purpose or a large part of what they do is spreading hate, we will ban them from the platform overall,” he said.

Spencer has become one of the most prominent American white nationalist in recent years, and claims to have coined the term “alt-right.” He infamously led a protest against removing a statue of Confederate leader Robert E. Lee at the “Unite the Right” rally last summer in Charlottesville, Virginia.

The day after President Trump’s 2016 election win, Spencer told public radio show “Reveal” it’s a “grand goal” to pursue a “new type of society that would actually be a homeland for all white people.” He added a white ethno-state was “ideal” and “something that I think we should think about in the sense of what could come after America.”