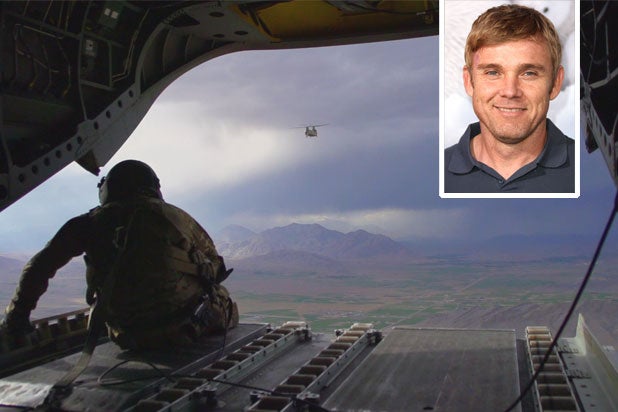 Ricky Schroder experiences the horror of war firsthand in his new documentary series “The Fighting Season,” which debuts on DirecTV’s Audience Network on May 19, TheWrap has exclusively learned.

Viewers will see a side of the former “Silver Spoons” and “NYPD Blue” actor they never imagined as he spends over 100 days encamped with American troops in the midst of war with the Taliban in the run-up to last year’s historic Afghan presidential elections in the six-episode documentary that he created and produced.

“It was the experience of a lifetime, but I am not sure I want to experience it again,” Schroder, 44, told TheWrap in an exclusive interview. “Just to see how Afghanistan looks and feels after it has been such a part of the news for 13 years was fascinating. It is a forever changing place.

“What is America doing there, and why has it become the scene of America’s longest war?” he wanted to find out.

As a youth Schroder wanted to become a soldier owing to his uncle’s many World War II stories. “But it was never a path for me,” he said, so instead he turned to acting at age nine. “After 9/11, I talked to an Army recruiter, but wasn’t able to join” because of health reasons, said Schroder.

He did, however, became friends with a three-star general, and embarked on an amazing journey that had him living last year with the highly-trained American soldiers commanded by the elite XVIII Airborne Corps and the 10th Mountain Division, Spartan Brigade.

“It was nothing like I expected. The Afghan people have been living among the war for 37 years. They are just wonderful people trying to live and raise their kids,” Schroder explained. After meeting the locals, “then I was led into the world of the Army and how they plan operations and carry them out — like loading up 200 soldiers and flying out into a remote place — to really see the act of war.”

Upon his return to the U.S., Schroder brought the project to DirecTV and emailed them out of the blue. “I had never seen such access into the Army or such honesty. He is one of those people who has broken down the barriers between news media and become one of them,” Chris Long, DirecTV’s SVP, Entertainment & Production told TheWrap, explaining that the deal was done in a 30-minute phone call with the filmmaker. “We pounced right on it.

“He could only shoot from May to August because the rest of the year the region is not inhabitable. That is their ‘fighting season’ that inspired the title, because outside of that time you can’t film or even have a ground fight,” he explained.

“One of their missions was to try and find a terrorist called Arctic Fox, so viewers really get an in-depth look into the hunt for him,” said Long. As for the delicate security issues involved in covering an ongoing war documentary-style, Schroder sent every piece of material to the Pentagon for approval. “That’s the co-operation that he has gained with them.”

TheWrap: Did the soldiers recognize you from your TV shows and wonder why the star of “Silver Spoons” was embedded with them?
Ricky Schroder: No, mostly they are so young — they’re my son’s age. They knew me as the “camera guy” – not as Ricky Schroder. Most people my age know what I have done, but [the soldiers] are in their 20s and had no idea.

Did you ever fear for your life?
Getting shot at is a bit traumatizing. When it first happens you’re like, “Was I just shot at?” Then you’re like, “It’s not so bad, I can put my head in the viewfinder, and getting wide shots and tights shots still.” It was a balance of how much you either kept your eye on the lens or moved yourself to safety. [The soldiers] were watching my back as best they could and we all came home safe. I’ve felt I was going to get killed more in L.A. than I did in Afghanistan, but there’s always the chance that you get hit or step on something you shouldn’t.

What was the hardest part of being in Afghanistan for so long?
For 12 days we slept on dirt, drank warm water and ate MREs (meal ready to eat). It changes you because of those kind of things. I was only gone for 110 days, but when I came home it took me several months to feel normal again because of this thing that you have experienced.

You’ve been married for 22 years and have four chidden — what did your family think of going there?
I don’t think anyone was happy I was doing it, but they understand and knew it was important to me and knew why I was doing it.

How did you gain such a deep level of trust from the soldiers and the Pentagon?
I was honest. I was myself. I brought people with me who were the right kind of people. One member of my camera crew is a war photographer, another one was in the Navy and had been to Iraq — I found the right team who could gain trust from them all.

What would you like the viewers to take away from “The Fighting Season”?
What the audience takes away is for them to decide … the one thing that surprised me, although the technology that we possess is just a limitless and powerful tool, in the face of the person who is willing to lose their life — like a kamikaze in World War II — it is mitigated in some ways. There is a dichotomy between what Star Wars possesses [and] the Taliban jihadists’ tactics, which are so raw and horrifying — they are farmers by day, then pick up an AK7.

I saw a wide and contrasting use of America’s military might. There were times when we could take out a target, but we didn’t because there was going to be collateral damage. If you kill civilians, you are never going to beat the Taliban because you have to win over the people. [The troops] are very cognizant of that, and that is something I never even considered.

Will you go back?
I don’t know if I will go back, it has been such an overwhelming year. I am reliving the footage every day and feel like part of me never left Afghanistan.

“The Fighting Season” premieres on Tuesday, May 19 at 9 p.m. ET/PT on DirecTV’s Audience Network.