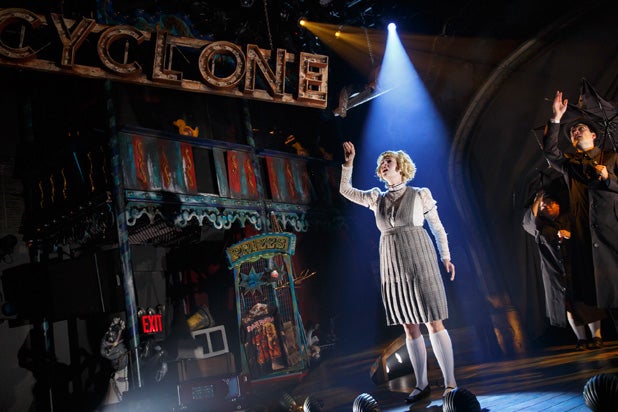 Writers of new musicals should never have characters announce that they’re in “The Twilight Zone.” For those theatergoers born in the immediate afterglow of the atomic bomb, Rod Serling’s seminal TV show embodied all the fear and paranoia of the Cold War, sandwiched as it was between Joe McCarthy and the Bay of Pigs. Even today, when “The Twilight Zone” stages all-day marathons on cable TV, the panic returns and is addictive as ever. Anyone who watched those episodes first-run could never say, “Make America great again!” America, back then, was scary.

The new musical with the “Twilight Zone” sound bite is titled “Ride the Cyclone,” which opened Wednesday at Off Broadway’s Lucille Lortel Theatre under the auspices of MCC after a significant run in Chicago.

A real episode of the “Zone” might have ended with the shocking disclosure that the six teenagers at its center had been killed in a roller-coaster accident, long before any of them realized they were dead. But that’s where “Ride the Cyclone” begins, with all six teens knowing they’re dead and feeling the need to tell us in song and dance how boring their respective lives had been up until this stupendous, spectacular mishap. Actually, a fortune-teller dummy (Karl Hamilton) prods them into these confessions as a sort of game: One of them will be allowed to live if he or she says all the right things.

The book by Jacob Richmond (he also wrote the songs with Brooke Maxwell) is never nonchalant about being macabre. The characters keep telling us how weird they feel, the “Twilight Zone” comment being an example. Also, early in “Cyclone,” a human-size rat (no actor credited) with red eyes appears, and we’re told that he chews the electrical cord that wires up the fortune teller. Unfortunately, in more ways than one, the rat never chews when the dummy is plugged in.

The various confessions are pretty much what you’d expect from a bunch of 17-year-olds, and since the show is structured around these stories, you’ll probably be checking your watch when the second teenager, named Noel (Kholby Wardell), reveals his fascination with Marlene Dietrich in “The Blue Angel” but for some reason impersonates a French chanteuse from post-World War II for his big number, complete with accordion.

Also Read: 'Dead Poets Society' Theater Review: Jason Sudeikis Goes Back to School, But Why Should We?

“Noel’s Lament,” as it is titled, is preceded by a straight-A student (Tiffany Tatreau) who talks about Up with People and channels the Jackson 5 to sing “What the World Needs Is People Like Me.” Between references to Dietrich and a right-wing glee club from the late 1960s, I began to wonder if these kids were baby boomers trapped in some time warp. But no, late in the show we’re treated to two numbers, “Take a Look Around” and “It’s Just a Ride,” that let us know the songwriters had seen “Hairspray” repeatedly.  Those sunny titles also sum up the show’s very anti-“Twilight Zone” world view.

Maxwell and Richmond are nothing if not eclectic in their source material. One of the dead girls (Emily Rohm) who lost her head in the Cyclone disaster and so has no memory (as if being dead isn’t enough to do the trick) impersonates Olympia the doll from “The Tales of Hoffman” and performs more mechanical tricks than ever imagined by Bartlett Sher in his lackluster staging of the Offenbach opera at the Met.

She not only levitates but does midair cartwheels, too.  Under Rachel Rockwell’s otherwise pedestrian direction, set designer Scott Davis and lighting designer Greg Hofmann deliver a moment of real magic on the tiny Lortel stage.