Contrary to a National Enquirer report, Ringo Starr has not spent weeks in rehab.

A spokeswoman for the former Beatle told TheWrap on Wednesday that the Enquirer’s story, claiming that an “alcoholic” Starr had checked into a residential program, is “totally untrue.”

“The story today about Ringo in rehab is totally untrue,” the spokeswoman said.

She added that the drummer, 76, “is healthy and happy and has been on holiday with his family in Malibu and sends everyone Peace & Love.”

Citing “an insider,” the Enquirer reported that Starr “wanted to go into rehab for a ‘tune-up.'” 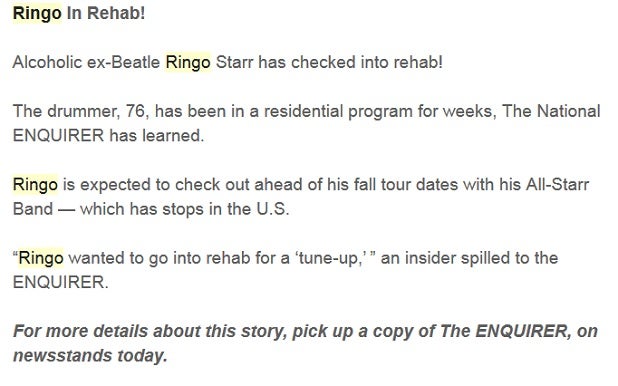 Starr is preparing to hit the road with Ringo Starr and His All-Starr Band — which includes Todd Rundgren, Steve Lukather and others — in a tour that is currently scheduled to kick off on Oct. 15 at Snoqualmie Casino in Sonqualmie, Washington.

According to the Enquirer, the now-refuted story is in its current issue, published Wednesday.