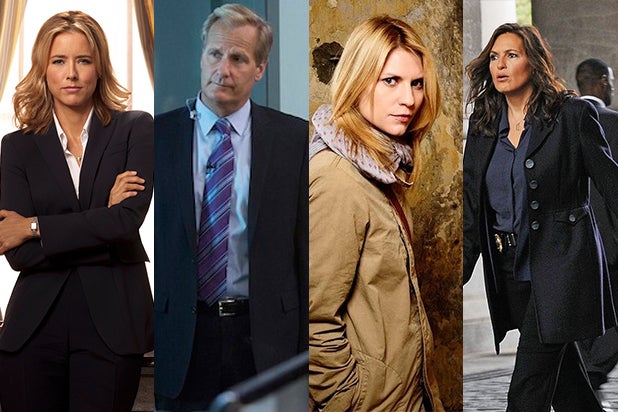 In the ongoing battle to woo viewers, TV shows are no longer just ripping stories from the headlines, they’re outpacing them.

“The truth is, the world is getting to be a very scary place,” Gideon Raff, creator of Israeli drama “Prisoners of War,” the basis for “Homeland,” told TheWrap.  “No matter how much you dramatize, somehow the headlines catch up with the drama not the other way around.”

As Raff’s show was wrapping up shooting its second season in 2011, an Israeli soldier named Gilad Shalit was returned home after five years in a Hamas prison. “When he was released, he was wearing the same shirt that one of our POWs was wearing,” Raff said. “It correlated with the show in an almost frightening way.”

“Prisoners of War” (“Hatufim”) also dealt with torture. Before shooting a single frame, Raff spent six months talking to Israeli POWs. “I wanted to make sure I was telling the right story.”

But ripping stories from the news can come with its own Texas-sized headaches. A Senate report released last week ignited a tsunami-like wave of controversy after concluding “enhanced” interrogation techniques of detainees did not help lead U.S. intelligence to Osama bin Laden. The report essentially debunked 2012’s Academy Award–winning movie “Zero Dark Thirty.”

“It’s horrific because you realize that people lost their lives, people were tortured, and nothing was gained from it,” Raff said.

Perhaps part of the reason TV shows are able to hit the mark, sometimes months in advance, is because networks are spending big bucks on media consulting firms and hiring actual news anchors and producers. It’s all an effort to satisfy audiences’ ever-growing thirst for accuracy while staying true to their primary mission: attracting and entertaining viewers.

“I’d say it’s half of the success of the show,” CBS’s “Madam Secretary” creator Barbara Hall told TheWrap. “I think people have more of an appetite for these storylines. It has a lot to do with social media and how we’re all constantly engaged in topics and headlines.”

On “Madam Secretary,” Téa Leoni plays Elizabeth McCord, a CIA analyst–turned–Secretary of State. The show, inspired by Hillary Clinton and the Benghazi hearings, has become one of the season’s breakout hits in no small part thanks to its dramatic arcs, many of them plucked straight out of the news cycle.

On the pilot, two American brothers are arrested in Syria after being accused of spying; at the same time, ISIS videos of men in black decapitating American journalists were all over the news. The second episode deals with an armed mob outside an American embassy in Yemen. Not quite Benghazi, but close … plus Yemen is the country where an American journalist was murdered by al-Qaeda on Dec. 6. And in the third episode, McCord is confronted with the fallout from a security breach, a la WikiLeaks. While the show had no problem tackling some of the biggest news stories, it also changed more than a few details.

In one of the biggest glaring differences, the American ambassador to Yemen is extracted out of the country safe and sound, thanks to McCord’s insistence on hiring a special civilian contractor, which was reminiscent of the Blackwater scandal in Iraq.

Leoni believes the show offers viewers an escape from the otherwise depressing reality of D.C. politics.

“We’ve got a polarization up on the Hill,” Leoni told TheWrap. “I think people are fed up with it. People want some drama back, not stillness.”

Making sure the scenes play out in a realistic way took more than a quick Google search.

“We hired a consulting firm called Glover Park, based in Washington,” Hall said. “We run ideas by them, they read our scripts and give us their thoughts, corrections and ideas. But we also like to take some license. We don’t want to do anything that’s outside the realm of possibility, but we also don’t want to be limited by the frame of reality.”

It also helps give the show a little more street cred. “We wanted to get the brass tacks right,” Leoni said. “Where does ‘Madam Secretary’ sit in the back of the car? Where does the security detail go? When do they go?”

And it’s not just viewers who have become sticklers for accuracy. In what can only be described as bizarre, the CIA has been tweeting some notes for the writers of NBC’s “State of Affairs,” giving the Peacock Network a free “Oval Office 101” lesson.

Also read: Katherine Heigl's 'State of Affairs': Why Networks Are in Love With Power Women Shows

After a recent episode showed Katherine Heigl‘s character handing the chief executive a stack of papers during the president’s daily briefing, also known as “PDB,” the CIA offered this correction:

“President Obama and other key national security policymakers now receive the #PDB in a tablet format.”

“Madam Secretary” and “State of Affairs” are just the latest in a long list of primetime shows with plot lines essentially plucked from national headlines. But these days, the jump from news to nuanced drama has become almost instantaneous.

Showtime’s “Homeland” is knee-deep in fighting Middle East ISIS-like terrorist groups. Netflix’s “House of Cards” announced it’s coming back with a whole new season of Washington backstabbing. “Scandal’s” Olivia Pope, based on real-life crisis manager Judy Smith, dedicated an entire recent episode to helping a new bride accused of pushing her husband off a cliff, a case that had the entire nation transfixed earlier this year. And Fox is currently developing a primetime series centered on an Ebola outbreak.

HBO’s “The Newsroom,” which just aired its series finale, has been all about a document-leak scandal reminiscent of Edward Snowden.

“The biggest advantage for people who enjoy ‘The Newsroom’ is the kind of visceral thrill of being able to relive something that you lived through not too long ago,” “The Newsroom’s” executive producer, Alan Poul, told TheWrap. “That is something that our fans particularly enjoy.”

But using real-life events as a background can come with its own headache: critics.

“When you’re dealing with a world of pure fiction, it gives you immunity from criticism. You don’t have to stick to the facts. With ‘The Newsroom,’ every event that we portray, the fact checkers come out,” Poul said.

To make sure he got it right, “The Newsroom” writer and creator Aaron Sorkin hired an army of 15 news consultants, including former CNN president Rick Kaplan and CNN anchor Ashleigh Banfield.

Even then, drama always trumped accuracy.

“Working with Aaron is like seeing a mad genius flitting about in his lab,” Banfield said. “He really knows his craft, which makes it tricky when a consultant wants to tell him something. Aaron’s first commitment is to do the story and making sure the viewers are thoroughly entertained. To him, the reality of a newsroom can be fudged a little in pursuit of that goal.”

During its first season, Sorkin kept true to the Gulf oil-spill saga, down to the dates and minutes. But the show’s second and third seasons were much more fictionalized. Season 2 centered on “Operation Genoa,” an erroneous report on a supposed U.S. war atrocity in Pakistan. While “Operation Genoa” is fictional, it was based on 1970’s “Operation Tailwind” in Laos, and a 1998 CNN report that led to the firing of one of its star reporters, Peter Arnett.

Also read: HBO's 'The Newsroom,' 'The Comeback' and 'Getting On' Will Return Nov. 9

“Reality shows changed everything,” said Banfield. “Dramas and even sitcoms have adopted many elements of this genre to maximize what the audience finds appealing. For what it’s worth, I still think good old-fashioned news is the best reality on the tube.”

As for Leoni, she said she never studied a particular person when preparing for her role. At least not the one you might think. “People have asked, did I emulate or follow or copy a prior Secretary of State. I’ve joked and said, ‘Yes. Kissinger.'”