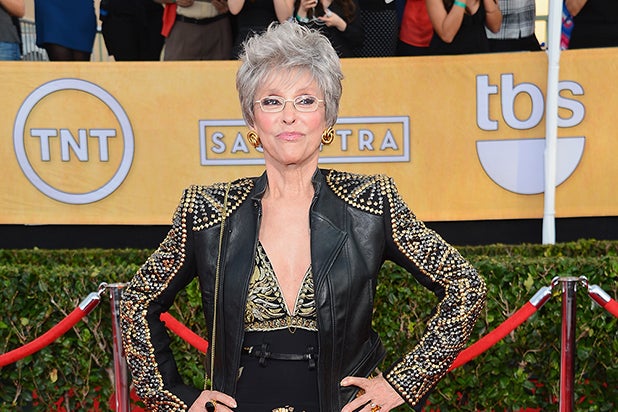 “West Side Story” star Rita Moreno has joined The CW’s “Jane the Virgin,” a spokesperson for the network told TheWrap.

Moreno, a bonafide Hollywood legend, has been nominated for six Emmys over the course of her career, winning as lead actress on NBC’s “The Rockford Files” in 1974 and then again as a musical guest star on “The Muppet Show” in 1976. However, her most memorable performance was as Anita in the 1961 feature film adaptation of “West Side Story,” which netted her both a Golden Globe and an Oscar.

She appeared on over 700 episodes of the PBS Kids series “The Electric Company,” eventually winning a Grammy for an album based off the educational series, which also featured now-embattled comedian Bill Cosby. Other notable TV roles include on HBO’s prison drama “Oz,” where she played Sister Peter Marie Reimondo, and on ABC’s TV adaptation of “9 to 5.” Moreno also took home a Tony Award for “The Odd Couple” in 1975, eventually becoming the first ever Hispanic EGOT (Emmy, Grammy, Oscar, Tony Award) winner.

“Jane the Virgin” is a comedy-drama series adapted from a Venezuelan telenovela and developed by Jennie Snyder Urman. The show, filled with often-surreal plot twists, centers around the artificial insemination of Jane — who is, incidentally, a virgin — and the eventual revelation that her biological father is soap star Rogelio. Co-stars include Andrea Navedo, Yael Grobgias, Justin Baldoni, Ivonne Coll and Brett Dier. Ben Silverman, Gary Pearl, Jorge Granier and Brad Silberling executive produce along side Urman.

As TheWrap previously reported, “Jane the Virgin” has enjoyed quite a ratings boost after star Rodriguez won a Golden Globe on Jan. 11. The network had 1.648 million viewers tune-in on Monday, marking a three-year high. The CW has already renewed the series for a Season 2.

Also Read: ‘Jane The Virgin': 5 Things to Know About the Midseason Premiere