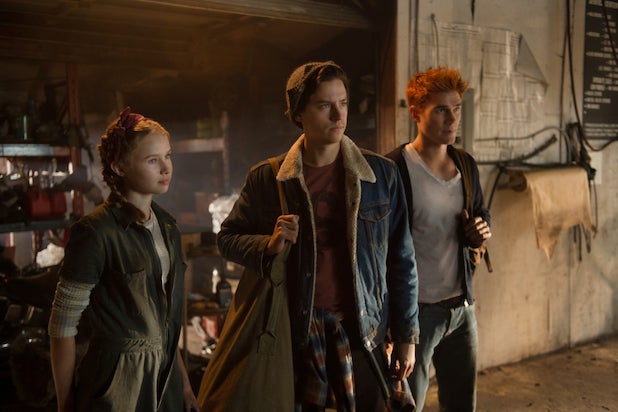 Oh, Fizzle Rocks! Just when “Riverdale” fans thought they might finally find out the Gargoyle King’s identity by the end of Wednesday’s fall finale, The CW series pulled a fast one on us by revealing one more person who it isn’t: Hiram Lodge. Well, who it probably isn’t.

Also Read: Watch Out, Bughead Fans: Gladys Is a 'Problem' for Jughead and Betty When 'Riverdale' Returns

OK, since Veronica’s father was high on the Gargoyle King suspect list before tonight’s episode, but come the end when he’s seemingly blackmailed the governor into putting the town under quarantine, we see him smiling at the Gargoyle King in his office, then is it possible there are multiple Gargoyle Kings?

And it sounds like “Riverdale” fans will have some time to break out their white boards and get to guessing during hiatus, because Aguirre-Sacasa says he doesn’t know yet when you’ll find out His Highness’ identity, “but you will for sure find out by the end of the season, not quite sure how soon you will.”

Also Read: 'Riverdale' Showrunner Says Next Week's Episode Is a 'Twist' on Fan Favorite From Season 2

What we do know right now is that when we met back up with Jughead (Cole Sprouse), Archie (KJ Apa), Veronica (Camila Mendes), and Betty (Lili Reinhart) after a five-week time jump at midseason, their not-so-sleepy, little hamlet will be a very different place now that it’s been cut off from the outside world.

“It will be, when we come back Riverdale will be a changed down,” Aguirre-Sacasa says. “We kind of talk about how the forces of darkness — the Gargoyle King, the Man in Black, the various factions — have ascended. And Riverdale is under a kind of a totalitarian regime. It’s both being under martial law and also there is a sense of lawless-ness about what’s happening. There’s not even a sheriff right now! And kind of what we’re playing with is ‘The Resistance’ starts to begin.”

And the leader of those rebels is Miss Lodge herself.

“We’ve been telling a story of Hiram and his daughter being on opposite sides,” Aguirre-Sacasa says. “It does feel like that’s even more intense when we get back. And much like Princess Leia was at the head of the Resistance in ‘The Empire Strikes Back,’ similarly, Veronica will be that.”

But don’t think just because the town has bigger problems under lock down, doesn’t mean we won’t get to the bottom of how Gryphons & Gargoyles leaked out of the walls of the Sisters of Quiet Mercy — or the mysterious seizures and Fizzle Rocks problem.

“None of these plot strings have finished,” the showrunner says. “For sure, these are things we’re going to be playing with still. I can tell you this: Gryphons and Gargoyles, Fizzle Rocks, even under quarantine that stuff continues. And in a weird way, because Riverdale is under quarantine and cut off from the rest of, basically the world, sort of those things gain more traction because there is less to do.”

As for how some people who are outside of town when the quarantine hits (see: Jug and FP, and Archie who is apparently making his way across the border) will be affected, the showrunner added: “I can say that some people are still outside of Riverdale and some people have gotten back into Riverdale, for sure.”

Oh, and if you are a Choni fan (because of course you are), get ready for some drama with the lovers-turned-roomies in the back half of the season.

“In the second half we spend more time with Cheryl and Toni,” Aguirre-Sacasa says. “In some ways they are very, very similar, and in other ways they are very different. And we will see that play out in a loving way, but problems are going to start arising. Because when you’re both independent and you start spending more time together, you start living together, things happen. We’re going to explore that relationship more in a really exciting way.”

Aguirre-Sacasa also told us there will be more Gladys and Jellybean when “Riverdale” comes back, which you can read about here.