“Republican National Committee Chairman Reince Priebus on Saturday told party officials to redirect funds away from nominee Donald Trump to down-ballot candidates, according to an official informed of the decision,” WSJ reports. “In practical terms, the party will be working to mobilize voters who support GOP House and Senate candidates regardless of their position on the presidential race.”

“That means the RNC will push Floridians who support both Democratic nominee Hillary Clinton and Republican Sen. Marco Rubio to vote. Before today, the RNC wouldn’t have sought to turn out Clinton voters, leaving split-ticket voters for Senate campaigns to target.”

The announcement was met with “WOAH” from the Democratic Congressional Campaign Committee, who reached out immediately for donations in an email blast:

“WOAH. National Republicans are reportedly cutting off Trump. (!!!!!) We are OVER THE MOONNow, the Republicans are doing everything they can to salvage their chances for 2016 — and rescue Paul Ryan’s teetering majority. If we all group together in this absolutely crucial moment, we have a chance to win it ALL. But you saw the Republicans’ announcement. The cash is on its way to bury us.”

“Can you help us stand up to them? We need $1OO,OOO by tonight’s debate.”

Sean Spicer, the RNC’s Chief Strategist & Communications Director, has completely denied this story and stated that it’s not true. 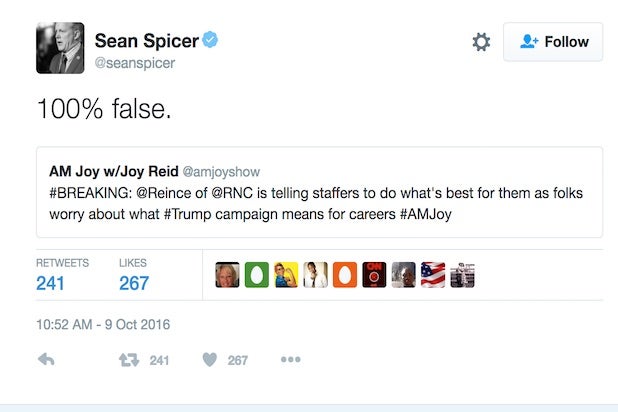