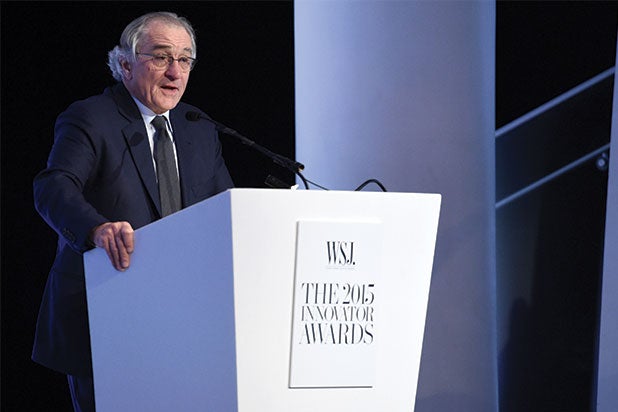 Robert De Niro had a short fuse (again) during the Wall Street Journal Innovator Awards on Wednesday night, slamming a tech mogul for being “condescending to actors” during his speech.

Stewart Butterfield, the creator of Flickr and Slack, joked about being the “nerd” in the crowd among the star-studded attendees while accepting the Technology Innovator award, according to Page Six.

“I watched ‘Godfather II’ on the plane,” Butterfield said on stage, pointing at De Niro. “When you killed Don Fanucci, I liked that.”

When De Niro took the stage shortly after to present Angelina Jolie with the Entertainment/Film Innovator award, his reaction was slightly different than Butterfield had expected.

“Whoever the last speaker was … I thought you were a bit condescending to us actors … celebrities,” he said. “I’m gonna go on record with you just to say that. And I don’t give a f -ck who you are.”

Butterfield didn’t seem to mind much, as he took to Twitter to make fun of himself shortly after: “I just literally got trash-talked by Robert De Niro. ‘I don’t know who the FUCK you are.’ #lifegoals.”

Also Read: Adam Devine on His Transition From Selling Steaks to Starring in 'The Intern' With Robert De Niro

De Niro is known for his short temper. In September,  the actor stormed out of an interview, claiming the reporter had “negative inference” throughout the interview.

“The whole way through, and I’m not doing it, darling,” he told reporter Emma Brockes after she asked him about avoiding going into auto-pilot mode on set. “You’re probably not even aware that you’re doing it, the negative inference.”

I just literally got trash-talked by Robert De Niro. "I don't know who the FUCK you are." #lifegoals pic.twitter.com/j9yT5ZiU4A