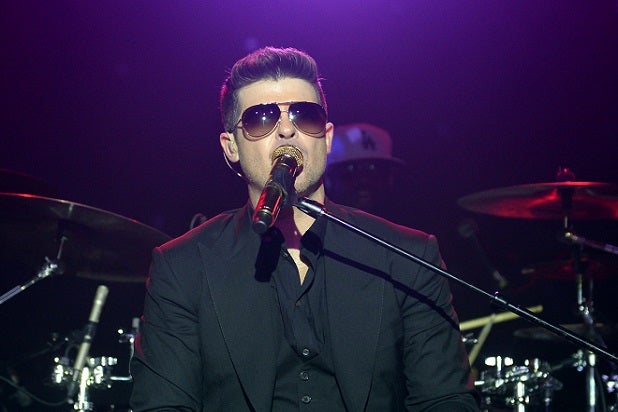 Robin Thicke admitted that he was “high” on multiple substances during the creation of his smash hit “Blurred Lines.”

The singer made the admission during an April deposition taken as part of a lawsuit over the song.

Asked whether he was in the studio with “Blurred Lines” co-writer Pharrell Williams when the rhythm track of the song was created, Thicke replied, “To be honest, that’s the only part where — I was high on vicodin and alcohol when I showed up at the studio.”

Relatives of deceased singer Marvin Gaye filed suit against Thicke last year, claiming that “Blurred Lines” ripped off Gaye’s 1977 song “Got to Give It Up.”

The Gayes’ lawsuit cites interviews that Thicke did with GQ and Billboard as evidence that he lifted the sound of Gaye’s song for his own.

In the GQ interview, Thicke is quoted as saying, “Pharrell and I were the studio and I told him that one of my favorite songs of all times was Marvin Gaye’s ‘Got to Give It Up.’ I was like, ‘Damn, we should make something like that. Something with that groove.'”

However, during the deposition, Thicke claimed that he had lied during the interview — because he was jealous of Williams, who Thicke claims wrote the lion’s share of “Blurred Lines.”

“After making an album that I wrote and produced myself, the biggest hit of my career was written and produced by somebody else, and I was jealous and I wanted some of the credit,” Thicke said in the deposition.