After building a career as a successful television director, Davis Guggenheim became an acclaimed documentarian with “An Inconvenient Truth,” the environmental film known colloquially as “the Al Gore movie.” He turned his cameras to another subject equally unexplored, the role of the guitar player in a rock band to create “It Might Get Loud,” which Sony Pictures Classics releases Friday.

Guggenheim brought together Jimmy Page of Led Zeppelin, U2’s the Edge and Jack White of the White Stripes for two days on a soundstage to see what would happen at the first meeting of legendary guitarists from three different eras. He spent considerable time with each individually in the cities of their youth —  Dublin, London and Detroit — before shooting the summit meeting in Los Angeles.

Jack White is the focal point of his bands. But the other two, while stars, are sidekicks. How do they balance that with taking on a supporting role?

On U2’s Elevation tour, my wife turned to me and said, You want to be Bono. I said no, I want to be the Edge. Live, lyrics are not that important — it’s about that intense vibration coming through those speakers. It’s the guitar that puts you in ecstasy. 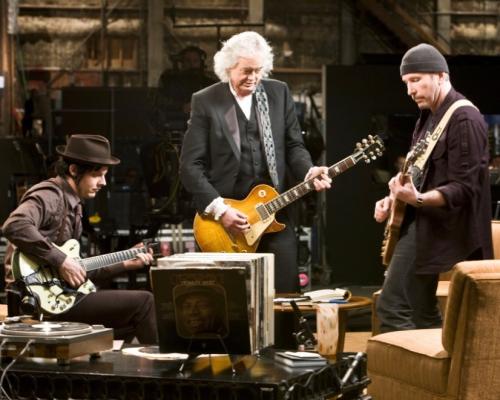 “The ugly truth about making documentaries is that you’re startled when you get the money, can’t believe you have the money, and just jump in. On "Inconventent Truth" we arrived at Al Gore’s desk and started shooting on day one — and you don’t have a point of view.

“This was much more intuitive We started with inexpensive, audio-only interviews and used those to tell us what to shoot. Jack told us about having to move his bed out of his bedroom to put in two sets of drums, and since we couldn’t shoot in that room, we animated it. The Edge gave a great metaphor about how trees are lined up in man-made forest, so we shot that. It was a different way to make a movie.”

What was the interview process?
We started by doing intense interviews with no cameras around, just the audio, and we captured these intimate moments. Jimmy talks about retiring in his 20s, about joining the Yardbirds to get out of doing Muzak sessions. They feel like personal journals. I wanted to get inside Jimmy Page’s head and know his deepest feelings.

That certainly occurred with Jimmy, but while he was so personal, Jack and the Edge reveal more sociological issues — poverty and the troubles in Ireland in the ‘70s.
The revelation with the Edge comes when we see him pull out old (tapes), an early sketch of “Where the Streets Have No Name.” It’s an artifact of a hit song before it was made. The song is already incredible, and it has no lyrics. These guys (the guitarists) are hidden.

Eventually, while the stories build, they all crash down in self-doubt. For the Edge, it’s a question of “Am I a writer or just a guitarist?” For Jack, it was about ”Am I allowed to play the blues? How do I find a way to play something authentic?” In all three cases, there’s a crisis of confidence.

You captured Page’s swagger, the intense technician inside the Edge and White’s intense devil-may-care attitude. There’s a sense that they are the characters they play onstage. How much were you aware of how the images they projected?
We didn’t want to reinforce the myth of the rock star. In every interview, (stars) are fighting against a human instinct to present themselves in a certain way. On camera, people stop being who they are. Jack is aware of what people find weirdly genuine; he says, ”Let me play along.”

You see the TV footage of Jimmy (in his early teens) when he’s playing skiffle music on the acoustic. His left leg is swinging while all the other boys are very stiff. Jimmy was always moving. When the Edge was teaching him “I Will Follow,” Jimmy was trying to move in a blues rock way, even questioning whether the Edge was playing his song the right way.

Your background is TV. If this meeting were documented for a TV show, would it have come out differently?
I watched “Behind the Music”  a lot. You know that every six minutes, the announcer will say, “When we come back from commercials, what happened after the third album.”  TV needs to keep you connected. With a film, we have the benefit of a captive audience and could linger longer in spots.

If you could have added three other guitarists — living or dead — to the mix, who would they be?
We thought about putting an empty chair there for Jimi Hendrix, just because he was so huge. And people have said how about Eric Clapton? Jeff Beck? You could make a movie with three other guitar players and be just as intense as long as they are artists still trying to figure out who they are and what they play. Too many musicians are more concerned with getting the look just right and reinforcing the myths.

At the end of the film, you have three legendary electric guitarists playing acoustic guitars and play a song that is so very different from their own styles, the Band’s “The Weight.” How did that come about?
It had been all electric, great hardcore rock music for two days. I saw one of the guys noodling on an acoustic and thought why don’t we end with something acoustic. The Edge said, "Let’s play ‘The Weight.’" They had to learn it — we had to scramble to find the lyrics. And you see the Edge teaching it the wrong way at first. We wanted to change the temperature, make the tone soulful. It’s one of the things people have criticized about the film. But I loved the idea and I have always been a fan of “The Last Waltz.” I saw it as a subtle homage to a great documentary.