And while he’s certainly a performer who can be very entertaining in movies like this where he’s at the heart of his comfort zone, his performance isn’t enough to justify this haphazard and only intermittently successful film.

The role of small-time rock promoter Richie Lanz gives Murray plenty of opportunities to do the insincere patter he does so well, but by the time Richie learns life lessons and makes unselfish choices, it becomes clear that he’s not really the character we’re most interested in following.

When we meet Richie, he’s headquartered in a shabby Van Nuys motel, fleecing would-be singers for $1,200 checks in exchange for promises of personal management. His long-suffering secretary (Zooey Deschanel) keeps asking him to get her a singing gig, and eventually he does — a tour of U.S. bases in Afghanistan. When they land in Kabul (“It’s just like Aspen…during wartime,” enthuses Richie), she bails soon after, taking his passport, wallet and plane ticket with her.

Stranded in a war zone, Richie befriends two doofus American arms dealers (Scott Caan and Danny McBride) who pay him to make what they promise is an easy delivery to a Pashtun chieftain.

After surviving a land mine, Richie and his cabbie-interpreter Riza (Arian Moayed, “Rosewater”) are invited to be the chieftain’s guests; in the middle of the night, Richie hears an extraordinary singing voice, one that happens to belong to the chieftain’s daughter Salima (Leem Lubany, “Omar”).

Richie, thinking he’s found his ticket back to the big time, becomes obsessed with getting Salima on “Afghan Star,” that country’s “American Idol” equivalent. There’s more than one hitch to the plan, not the least of which are the fundamentalists who believe that women shouldn’t perform in public. But the fast-talking manager won’t stop, and he’ll make deals with anyone, to make his client a star. 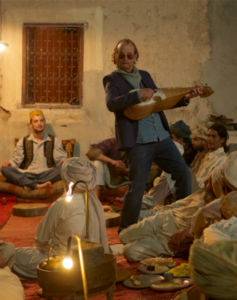 That’s all well and good, but once Salima turns up — especially since she’s played by the charismatic Lubany — Richie’s tale becomes a lot less interesting. We’ve seen plenty of movies about aging burn-outs getting one last shot at redemption, but that’s a story arc that instantly pales next to the struggles of an Afghani woman who defies social convention by wanting to sing in public, an act that she sees as a way of glorifying Allah even when the men around her think of it as brazen and shameless. He can eventually get another passport and another plane ticket, after all, but what will become of her?

Director Barry Levinson doesn’t quite know what to do with any of the women here, between Salima being pushed to the margins, Deschanel’s singer making an idiot of herself before screwing over the protagonist, and Kate Hudson getting stuck playing a total male fantasy: a talented sex worker on her “farewell tour” who nonetheless gives Richie a night to remember in exchange for a vintage Swatch.

Hudson then spends the rest of the movie as a handy helpmate to Richie, even letting Salima stay in her double-wide trailer. There might have been some funny interplay between an actual prostitute and a devout young woman accused of being one because of her desire to sing Cat Stevens songs on TV, but Allah forbid that Mitch Glazer’s script allow these women to speak to each other.

“Rock the Kasbah” keeps butting up against the dark comedy it might have been, with an American blithely chasing after his showbiz dreams in a land where Humvees and IEDs still lurk around every corner. But it chooses to go cuddly instead. Worse still, it doesn’t even handle that strategy all that well, with a climax that fails to deliver the emotional punch that’s clearly intended.

The cast of old pros (including Bruce Willis as a soldier of fortune) amble through amiably enough, but a few laughs here and there aren’t enough to make this movie come together in a satisfying way. “Rock the Kasbah” doesn’t qualify as a quagmire, but it could definitely use an exit strategy.