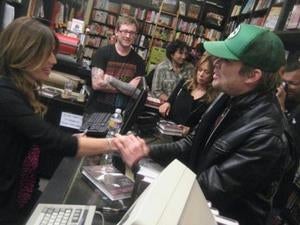 Model/”rocker wife” Mary Forsberg Weiland quietly packed a tour bus-sized group of ’90s rockers into Book Soup for the launch for her autobiography, “Fall to Pieces,” on Monday night.

Best known for setting ex-husband and Stone Temple Pilots’ Scott Weiland’s clothes on fire in their front yard — in what became known as “the bonfire in Burbank” — Forsberg Weiland alleviated the stress of reading sensitive passages to friends by asking Jane’s Addiction rocker Dave Navarro (seated attentively in the second row) if she could read an anecdote centering on him. Navarro gave the thumbs-up.

Later, Mark McGrath waited in line with the civilians to get his copy autographed (at left; photo by TheCHIMP.net). 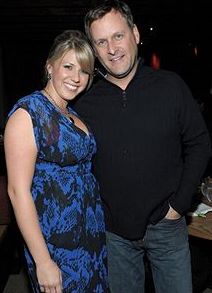 On Tuesday night, Jodie Sweetin of “Full House” fame celebrated the launch of her book “Unsweetined” with a dinner party at Nobu West Hollywood.

Over sushi and signed books, the crowd quickly focused on the book’s 1994 Mickey Mouse Club photo of Sweetin flanked by Christina Aguilera, Britney Spears, Ryan Gosling and Justin Timberlake. Meanwhile, Timberlake himself was hitting another bash just a few minutes away. 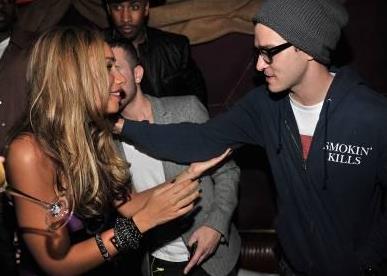 Brit singer Leona Lewis tucked as many friends as the fire code would allow in to Hyde Tuesday night for an Asics-sponsored celebration of her new album “Echo.” Friends like Timberlake (at left; photo by WireImage), Ciara and Eve came to congratulate her.

As word leaked out that fellow Brit Paul Oakenfold was spinning for the tiny room (he fills stadiums abroad) and with the growing U.S. star power inside, Timberlake and Lewis ducked out the back (separately) as a paparazzi storm suddenly clogged up Sunset Boulevard.