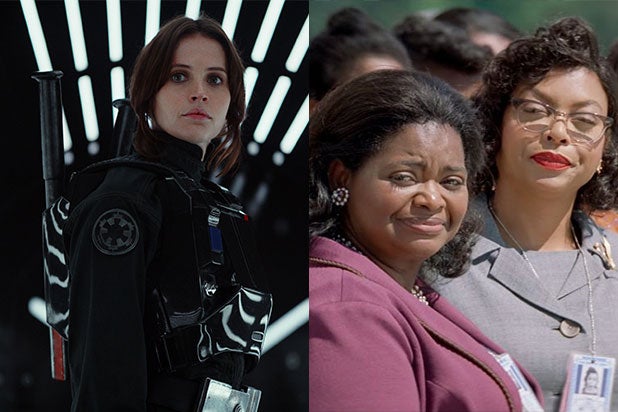 “Hidden Figures” and “Rogue One: A Star Wars Story” had a neck-and-neck weekend at the U.S. box office but the “Star Wars” sequel snagged an estimated $22 million to claim its fourth straight weekend at No. 1.

Cumulatively, “Rogue One” has earned $477 million domestically since its release in mid-December.

Fox and Chernin Entertainment’s “Hidden Figures,” starring Taraji P. Henson, Octavia Spencer and Janelle Monae, fell just short of the top prize, earning an estimated $21.8 million in its first weekend in wide release as it expanded from 25 screens to 2,471.

Universal and Illumination Entertainment’s “Sing” came in third place this weekend, crossing the $200 million threshold at the domestic box office after raking in $19.5 million. In North America, the animated film has earned $213.4 million in total.

The film had a budget of $35 million and has a CinemaScore of B+ and a Rotten Tomatoes score of 18 percent. “Blood Wars” has earned $45 million so far overseas since opening in late November.

“La La Land” came in fifth, adding another $10 million (a 5 percent increase from last weekend) and bringing its cumulative gross to $51.7 million from 1,515 locations. The film, starring Ryan Gosling and Emma Stone, will begin its U.S. IMAX run next weekend.

This weekend also marked the expansion of Focus Features’ “A Monster Calls,” starring Felicity Jones and Sigourney Weaver. The film grossed $2 million this weekend from 1,500 U.S. theaters. The film has a CinemaScore of A and a Rotten Tomatoes score of 86 percent.

“Hidden Figures” follows the story of three female mathematicians at NASA during the 1960s who helped launch John Glenn into orbit. The film, with a budget of $25 million, has a CinemaScore of A+ and a Rotten Tomatoes score of 93 percent.