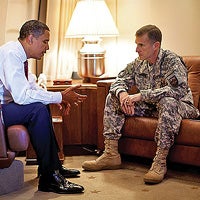 Amid a growing chorus for his own resignation, Gen. Stanley McChrystal’s civilian press aide, Duncan Boothby, has resigned – the first casualty in the fallout over McChrystal’s explosive comments about the Obama Adminstration published in Rolling Stone.

McChrystal apologized late Monday after excerpts from the profile – “The Runaway General,” written by Michael Hastings – were released. (McChrystal has been summoned to the White House from Afghanistan to discuss his comments with the president and other cabinet members. The meeting is scheduled for Wednesday.)

Hastings, who is currently in Afghanistan, did not immediately respond to an e-mail from TheWrap seeking comment.

But in an interview with CNN, Hastings said McChrystal was “very aware” that his comments would be find their way to print. “I had a tape recorder in my hand most of the time,” Hastings said.

He said there were no ground rules from McChrystal’s camp while reporting the profile, though parts of conversations were off the record and “a lot I didn’t use.”

According to Politico, on Tuesday's “Morning Joe,” editor Eric Bates said that McChrystal “saw the piece prior to its publication as part of Rolling Stone's standard fact-checking process – and that the general did not object to or dispute any of the reporting.” 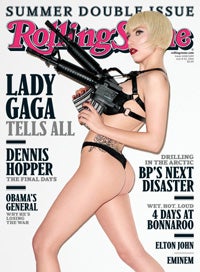 But the magazine’s managing editor, Will Dana, clarified via Twitter that Rolling Stone “didn't show [McChrystal the] story. We ran the facts by him. Big difference.”

Boothby “was heavily involved in arranging access for journalist Michael Hastings to McChrystal and his staff this year so Hastings could write the profile,” according to the Washington Post.

According to the article, Hastings spent about a month with McChrystal. But according to a report by NBC’s Richard Engel, that Hastings got that much access to McChrystal was partly luck – ash from Iceland’s Eyjafjallajokull volcano hindered air travel while they were in Paris, turning two days with the general into 10.

Hastings, however, dismissed the notion that the extra time allowed McChrystal to open up to him.

Most of McChrystal's critical comments published in the profile, Hastings said, came during the first 24 to 48 hours he spent with the general in Paris.

According the profile, McChrystal thought Obama looked “uncomfortable and intimidated” by the roomful of military brass during their first meeting. Of their second, “it was a 10-minute photo op,” an adviser to McChrystal told the magazine. “Obama clearly didn’t know anything about him, who he was. Here’s the guy who’s going to run his [expletive] war, but he didn’t seem very engaged. The Boss was pretty disappointed.”

Despite the far-reaching scoop, Rolling Stone took a strange approach to cash in. Despite the scores of media outlets reporting on McChrystal's comments and subsequent apology on Monday, the magazine did not post the article on its website until late Tuesday morning, missing the first few critical working hours of interest.