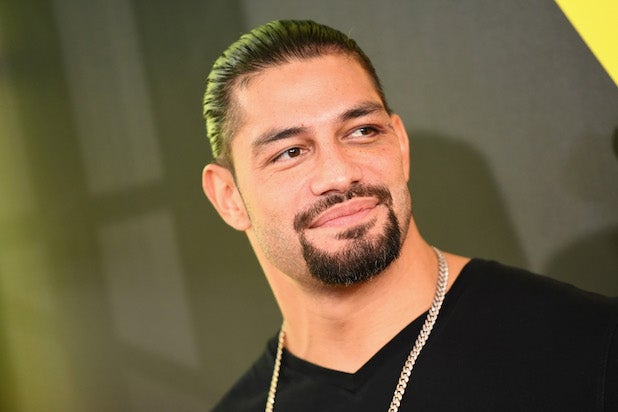 Roman Reigns, real name Joe Anoa’i, returned to WWE on “Raw,” where he gave an emotional and wonderful update on his October leukemia revelation.

“The good news is, I’m in remission, y’all,” Reigns told a delighted Atlanta audience on Monday.

Oh yeah, and he’s back. Believe that.

The Big Dog is BACK! #RomanReigns announces that he is in remission and back on #Raw! @WWERomanReigns pic.twitter.com/yHQdiFH2Ty

Also Read: WWE's Edge on That 'WrestleMania X-7' Spear Off the Ladder: 'I Almost Went Too Soon' (Video)

And then this gorgeous reunion happened:

Burn it down, and hug it out.

Anoa’i opened the USA Network show by thanking the WWE Universe for their support, adding, “I missed y’all.”

During his speech, the Big Dog said he was “terrified” to share his cancer diagnosis with the world back in the fall. “I didn’t know how you’d react,” Reigns, who fans were split on before his big announcement, said at the top of tonight’s show.

But the outreach of prayers he received was beautiful: ‘God’s voicemail was full,” he added on Monday.

Reigns then vowed to use his sizable platform to spread cancer awareness.

Also Read: WWE Wrestlers Robbed While in Minneapolis for '205 Live' (Photos and Video)

Oh, and on a return to competition? Acknowledging the giant WrestleMania sign that hangs in every arena between the Royal Rumble and the so-called Super Bowl of sports entertainment, Reigns said, “We’ll get to that later.”

But who could he possibly face at or in the lead-up to ‘Mania?

"For @WWERomanReigns' sake, I hope our paths don't cross."

Anoa’i, a leader in the locker room and the face of the pro-wrestling company, stunned a “Monday Night Raw” crowd in October when he revealed an 11-year battle with cancer. The disease had been in remission until a new diagnosis.

Reigns, who was WWE Universal Champion at the time, surrendered the top “Raw” title at the very top of the show.

“For months now, maybe even a full year, I’ve come out here and spoke as Roman Reigns and I said a lot of things. I said that I’d be here every single week. I said I’d be a fighting champion, I said that I’d be consistent and I said that I’d be a workhorse but…that’s all lies,” Reigns said in the middle of the ring to open the show. “That’s a lie because the reality is…my real name is Joe…and I’ve been living with leukemia for 11 years. And unfortunately, it’s back.”

Also Read: Chyna Fans Split on WWE Hall of Fame Entry as Part of DX and Not as Solo Act: 'Load of Bollocks'

“But you want to know who gave me a chance? The team that gave me a chance was WWE,” he said in the October speech. “And when I finally made it to the main roster and I was on the road they put me in front of all of you…and to be honest, you have all made my dreams come true.”

“By no means is this a retirement speech,” Reigns promised at the time. “I will beat this, I will be back, and you will see me very, very soon.”