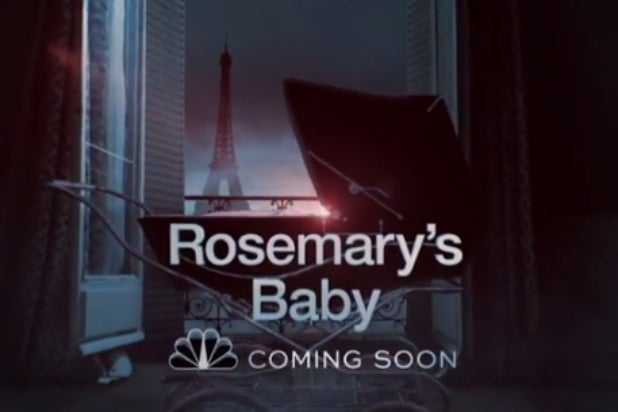 Hope you like crying babies, because that is all the 10-second promo teaser for NBC’s miniseries “Rosemary’s Baby” features.

The ultra-brief clip opens on a view of a foggy Paris, with the Eiffel Tower in the background. The camera pans back to reveal a balcony, open French shutters and an old-school baby carriage, glowing from the inside. An infant screams over the shot.

In the NBC reboot of the story, soon-to-be mother Rosemary (Zoe Saldana) and her husband move into a Paris apartment with a darkly-storied past. After Rosemary becomes pregnant, she begins to suspect that her husband and neighbors have ulterior motives about the future of her child.

The miniseries is being adapted from Ira Levin’s 1967 novel, the basis for the 1968 movie starring Mia Farrow in the titular role. That movie was directed by Roman Polanski. Film and TV director Agnieszka Holland (“Treme”) is handling directing duties for the miniseries, which Scott Abbott (“Winchell”) and James Wong (“American Horror Story”) are writing.

“Rosemary’s Baby” is due out this summer on NBC.