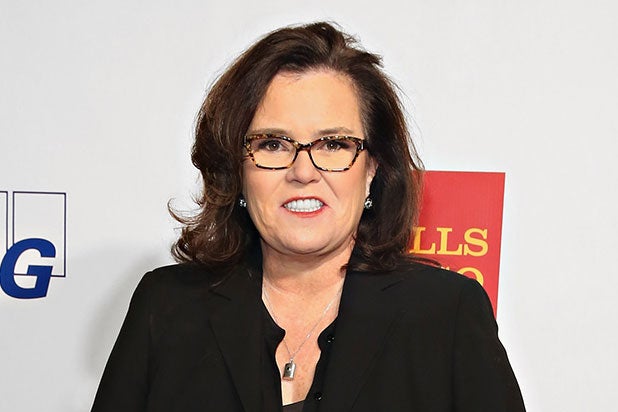 Rosie O’Donnell wrote a poem about meeting Ivanka Trump in a New York City restaurant this week and revealed that the trip was the first time she had been out of bed since watching Donald Trump insult her during the presidential debate.

“I am tired, this is the first time I have been out out of bed really – to be honest, since the debate, I have been sleeping a lot,” O’Donnell wrote in a poem titled “8 Million to One,” posted to her website Thursday.  “Depression clings to me — it’s hard to walk, to shower, to try, to care.”

During the first debate of the general election, which was watched by 84 million people, Donald brought up the former “View” hosts name while sparring with Hillary Clinton over political attack ads.

“Hillary is hitting me with tremendous commercials,” Trump said towards the end of the debate last week. “Some of it said in entertainment, some of it said by somebody who’s been very vicious to me, Rosie O’Donnell. I said very tough things to her and I think everybody would agree that she deserves it and nobody feels sorry for her.”

He has previously called her “dumb,” “a slob,” “disgusting,” and most recently said she had a “fat, ugly face.”

Despite Donald’s insults, O’Donnell described his daughter Ivanka as “the most beautiful woman I have ever seen.” Although O’Donnell wanted to leave the restaurant, she still introduced herself to Ivanka, writing she “smiled genuinely, her husband was warm and gracious” and noted Ivanka “was absurdly kind” after O’Donnell told her about the “pain and shame” she’s endured.

She ended the poem with, “I wrote a book once about bashert, the concept of meant to be. It has comforted me on my darkest days, when my inner voices scream ‘you deserved it’ — as her father has, same as my own.”

O’Donnell and Donald, both outspoken celebrities, have been embroiled in a war of words for years. In 2006, O’Donnell called Donald a “snake-oil salesman” following his announcement that he would not fire then-Miss USA Tara Conner. The arch enemies got into a Twitter feud in 2011 after Donald tweeted that he felt sorry for her new partner in love. O’Donnell responded, “wow u r an ass.”

Read the entire poem below.

it’s hard to walk
to shower
to try
to care

two
so connected
alone together
in a crowded corner

nodding slowly
yes
she said
it was

dear god
i prayed
guide me
out of here

the entire encounter
start to finish
was 4 minutes
max

as her father has
same as my own