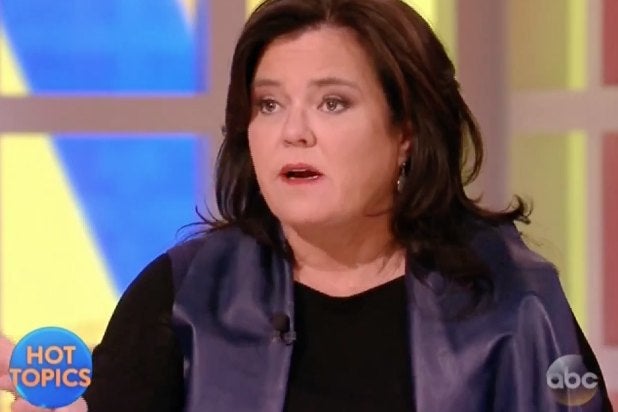 In her blog, “The View” host said she was disappointed in Couric for not skewering the actor over admittedly molesting teenage girls in the 1970s and ’80s.

“I was sure she was gonna do 2 him / what she did 2 sarah palin,” wrote O’Donnell, in her characteristic poetic meter, “hit him with his truth / right between the eyes / expose him for who he was / ‘what newspapers do u read sarah?’ / she saved us all then this time she didn’t,” wrote O’Donnell.

O’Donnell then went on to attack Collins: “He took the hand of 10 year old girl / and used it to jerk himself off.”

During his Dec. 19 interview with Couric on ABC’s “20/20”, Collins admitted to molesting and exposing himself to young girls, describing an encounter that he called “unthinkably wrong.”

Addressing specifics of the molestation, O’Donnell bristled, “ummmm — after u came on the kids hand — u mean?  stephen … right? / u are not equals / she was an innocent child / a baby girl / u have a daughter for gods sake / were u able to resist the urge to touch her? / how noble / congrats.”

Invoking her own personal experience, O’Donnell charged Collins with ruining the lives of his victims: “in case u wonder / what ur man sized penis / ur abuse of power / ur lack of impulse control did to that kid / i will tell u a bit about me / sex is not fun / not now / not ever / it is married to a lingering terror / joy evaporated.”

When the allegations first surfaced in October, O’Donnell said she considered Collins a friend, adding that she was “shocked” and “heartbroken” about the news.

“It devastates everyone in the radius of that person because it’s a shocking allegation,” O’Donnell said. “For me, I always have my antennae up, having had a childhood with that.”

Of that experience, O’Donnell shared further, “My body became my enemy / I would not love it / take care of it / treat it well / it betrayed me… like many survivors of childhood sexual abuse / i became obese / i have struggled with severe depression / i have anxiety disorders / shame confines me / i bet stephen / there is a 52 year old woman — like me / sitting in her house / still frightened / her perspective skewed / by u.”

O’Donnell then takes aim at Bill Cosby, saying, “ur casual lack of accountability / for her and for me / has wounded us / once again / u / u r an archetype / as is Bill Cosby / pedophile/rapist / how dare i / how dare i not?”

You can watch Couric’s interview with Collins here.