Rush Limbaugh appeared as a special guest during President Trump’s State of the Union address, one day after announcing he was diagnosed with advanced lung cancer. During his speech, President Trump announced Limbaugh would receive the Presidential Medal of Freedom, one of the highest civilian honors.

“He is the greatest fighter and winner you will ever meet,” Trump said. “Rush Limbaugh, thank you for your decades of tireless devotion to our country … in recognition of all you have done for our nation, I am proud to announce tonight that you will be receiving our country’s highest civilian honor: the Presidential Medal of Freedom.”

Limbaugh fought back tears as the first lady presented him with the medal.

Limbaugh entered the U.S. Capitol Building in a wheelchair, telling reporters, “I feel good. I feel great.” He added he was “still in awe” to receive the honor Tuesday night.

Limbaugh chatted with Trump’s daughter, Ivanka Trump, and her husband, Jared Kushner, before taking his seat. 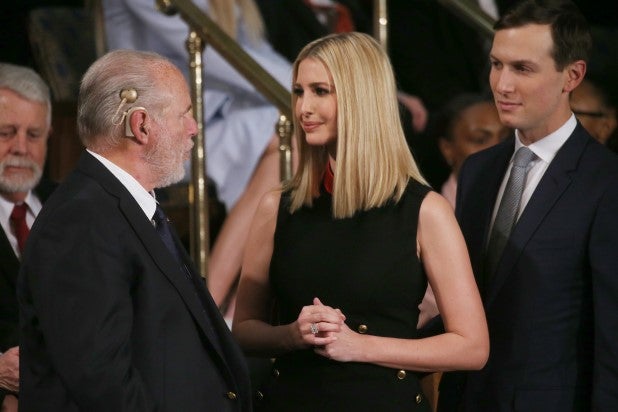 Viewers may have spotted cochlear implants Limbaugh had in both ears; he had the devices put in in 2002 after losing much of his hearing.

On Monday, Limbaugh revealed he had advanced lung cancer.

“I have to tell you something today that I wish I didn’t have to tell you. It’s a struggle for me because I had to inform my staff earlier today. I can’t help but feel that I’m letting everybody down. The upshot is that I have been diagnosed with advanced lung cancer,” he said, revealing the diagnosis came after he first felt shortness of breath on Jan. 12.

The State of the Union Address comes one day before Trump is expected to be acquitted by the GOP-majority Senate on impeachment charges. The House impeached Trump in December 2019 on charges of abuse of power and obstruction of Congress.

Rush Limbaugh arrives at the Capitol for State of the Union pic.twitter.com/NCr88Vc7W1