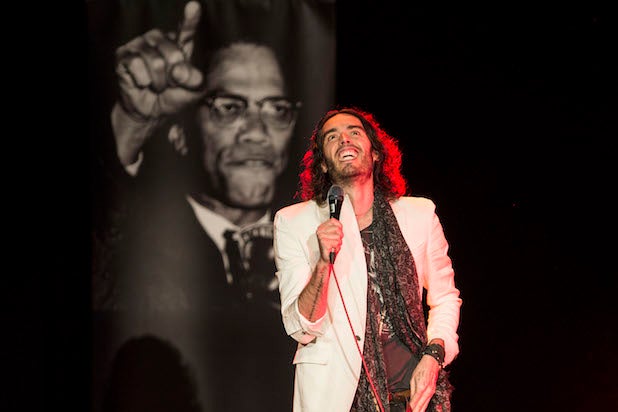 Ondi Timoner will direct and produce the film, which has a working title of “Brand.” She expects to complete the documentary by January 2015.

Brand has granted Timoner complete access and the film team final cut to enable the completion of this film which has followed his personal and professional journey for the past five years.

Brand joined Timoner via Skype at the Sheffield DocFest’s Crucible Theatre on June 9th for a Q&A that followed the World Premiere of a short film the two collaborated on called “Russell Brands the Bird,” which was originally filmed as part of  Timoner’s Chief Executive Artist series on her ongoing innovation network.

The short film follows Russell on a visit to perform at Twitter HQ in San Francisco, CA, which is then intercut with his reflection on the role of social media in our lives and how it has transformed us. The short film is currently on sale here.

Mayfair Film Partnership and Interloper Films have decided to utilize industry-changing VHX technology to build a community by offering the film early. Participants in the pre-order will receive exclusive behind-the-scenes clips and updates as the film is being produced, as well as special privileges when the film is released.

Brand looks at how and why people like Gandhi, Malcolm X, Jesus and Ché Guevara did what they did, and in what ways he might be a little bit like them. After writing about them, he realizes they are all willing to die for what they believe in due to an unwavering dedication to their causes. This becomes the Messiah Complex show, where Brand skillfully balances philosophy, history and humour, and he embarks on his first-ever world tour.

This feature documentary film follows his spiritual and biographical journey as Brand travels far and wide, meeting with a wide and fascinating range of people including Mike Tyson, Pink, 50 Cent and Noel Gallagher, as well as American Marines, orphans in Kenya, socialists in London and inmates on death row. The film culminates with Brand challenging and empowering people to stage a non-violent revolution.