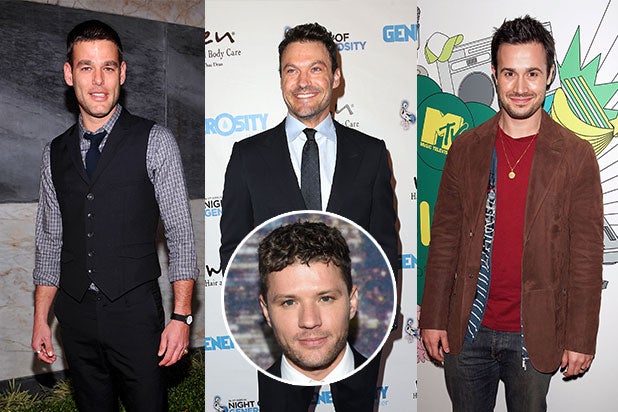 Ryan Phillippe broke social media and TV fan hearts when they realized he would not be returning for the second season of ABC drama “Secrets and Lies.”

Phillippe cleared the air on Twitter saying his work — hailed as some of his best in a career that spans three decades — was always intended to be a limited tale about a murder investigation, and that the show will focus on a new crime come fall.

A group of actors of the Phillippe ilk — TV and movie idols of the 1990s and 2000s  — who could carry a dramatic storyline with a believable word-weariness while still serving up some massive sex appeal.

See our 11 actors who should carry Phillippe’s torch for Season 2 of “Secrets and Lies” (Hey ABC are you reading this!):

Brian Austin Green
Mr. Megan Fox is the perfect example of overwhelming TV stardom, as everyone’s favorite high scho0l nerd turned dream boyfriend as David Green on “Beverly Hills 90210.” While he’s enjoyed network guest appearances on comedies like “Happy Endings,” Green is ripe for a meaty drama, not unlike the resurgence of Joshua Jackson on Showtime’s “The Affair.”

Freddie Prinze Jr.
Who owned the early 2000s harder than Phillippe — his “I Know What You Did Last Summer” c0-star Freddie, of course. Prinze Jr. wife Sarah Michelle Gellar were royalty to the teen set before he pursued other passions like culinary school and serving as staff writer for WWE. Would he ever deign to return to the craft, we’re certain a network would happily plant him on the schedule.

Andrew Keegan
Star of seminal teen classics like “10 Things I Hate About You” and The WB’s “7th Heaven,” Keegan has busied himself lately by starting his own religion. We’d rather seem him playing a sultry pastor on TV.

Charming, menacing, running from a serial killer in a rain slicker — Mekhi had it all in his early career. Whether Brandy’s love interest in “I Still Know What You Did Last Summer,” a young Beyonce’s foil in “Carmen: A Hip Hopera” or the sensitive thug in “Soul Food,” he was always compelling.

Balthazar Getty
The bad boy of “Brothers & Sisters” has always intrigued us, not just because of his good looks and pedigree. The ABC family drama never gave him enough material to showcase his natural gifts — a vulnerable-yet-stubborn sensibility that’s in many of cable’s leading man antiheroes.

Ian Ziering
The Aaron Spelling legacy actor has been languishing in hunk stunts like a guest stint at Chippendales Las Vegas, and absurd cultural fare like  Syfy’s “Sharknado.” We think Ziering would impress and surprise with something higher brow.

Ivan Sergei
Another alumni of TheWB, the irresistible Ivan played opposite Amanda Peet in the short-lived but long-remembered “Jack & Jill.” He most recently had appeared on ABC Family’s “Twisted” so he’s already part of the Disney-Owned ABC family. Sort of.

Casper Van Dien
Again, Casper is a prime example of an able-bodied guy who has classically been targeted for silly or sexy fare. “Super Troopers” and TV’s “Titans” were profile raisers years ago, but it’s time to take this stallion out of the stable.

Barry Watson
Fair is fair: if Jessica Biel gets to live in a state of perpetual audition, her “7th Heaven” co-star Barry Watson deserves the same chance — and he’s quite happy on TV.

Mario Lopez
Lopez is gainfully employed as the host of “Extra” and an author of fitness books (obviously), but remember the sweet days he graced school halls on “Saved By The Bell”? He’s had enough modern experience (FX’s “Nip/Tuck”) to merit a more serious turn.

Devon Sawa
Sawa burned hot and faded fast with scene-stealing roles in “Casper” and “Now And Then.” He also deserves special consideration as the only blonde on our highly scientific list.